I agonised long and hard whether to fit side windows, my old van was a full on panel van. Many arguments for (light, views, improved ventilation) and against (reduced insulation, less secure, reduced stealth) but in the end I mostly decided I wanted to enjoy the view if it was raining, so decided fit a pair of sliders. Later in the build I’ll be fabricating some inside shutters which will essentially return the setup to a panel van so I can have the best of both worlds.

Had originally wanted to go for some CR Laurence units, but was unable to get in touch with their European sales department after a few attempts (thanks for nothing…) so had to seek out an alternative. That turned out to be Van Windows Direct. The windows seem really well made, a good price – £175 each side. They were really helpful with advice before and during the fitting too. I collected the windows, along with the fitting kit – a primerless bond and the rubber edging for the metal – from glorious Yorkshire one Saturday morning. The toughest bit of the entire process was waiting for a dry couple of days. Which took longer than I’d hoped.

I’m no stranger to cutting holes in vehicles, having fitted a couple of Webasto ragtops to Beetles in the past, and there’s not a lot can go wrong with fitting these really. The beauty of the T1N is the outline for cutting the hole is already there, so no measuring, just get stuck in. Making sure you’re cutting the right line of course… First up, took an angle grinder to the supporting ribs inside the van: 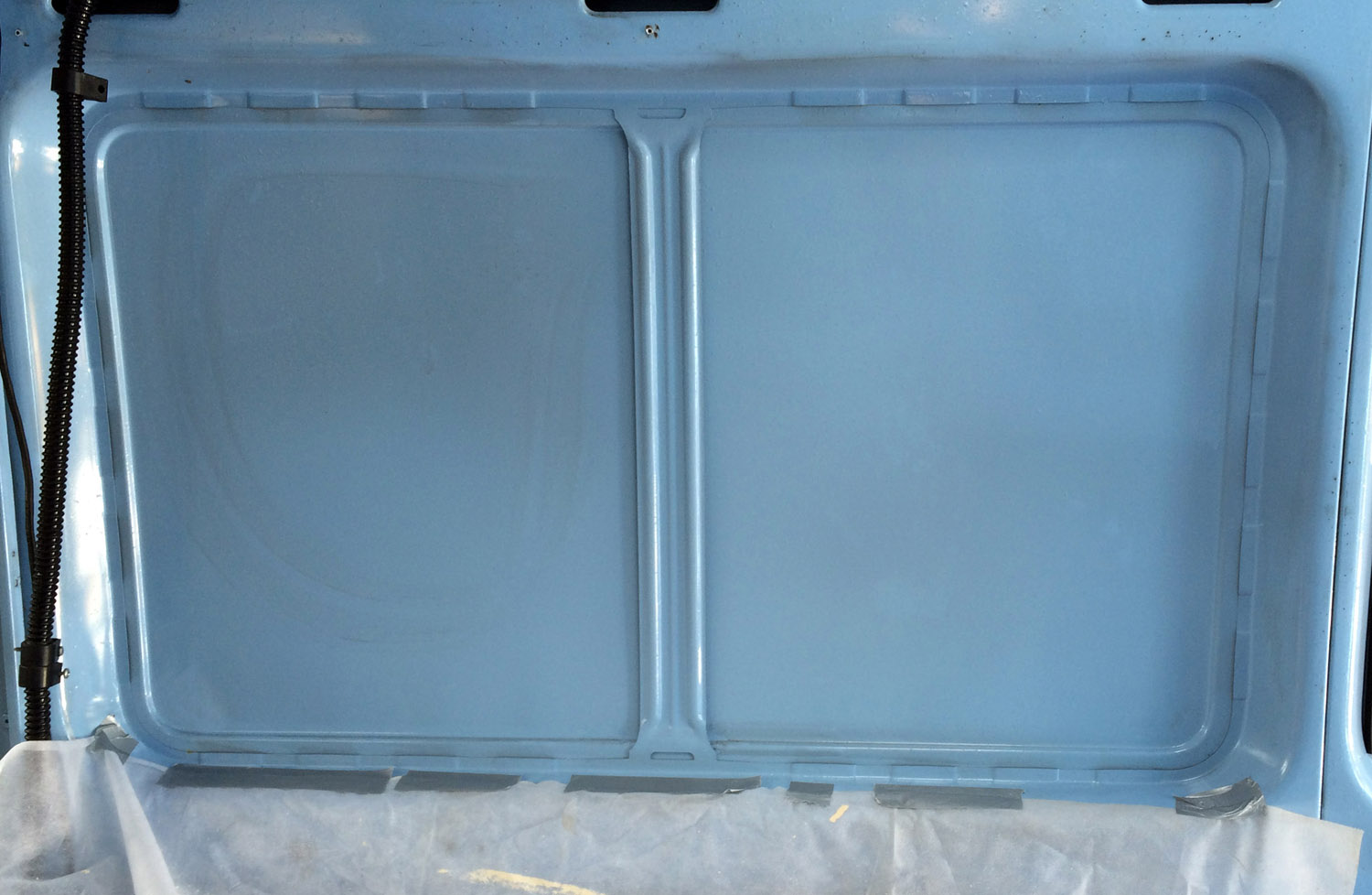 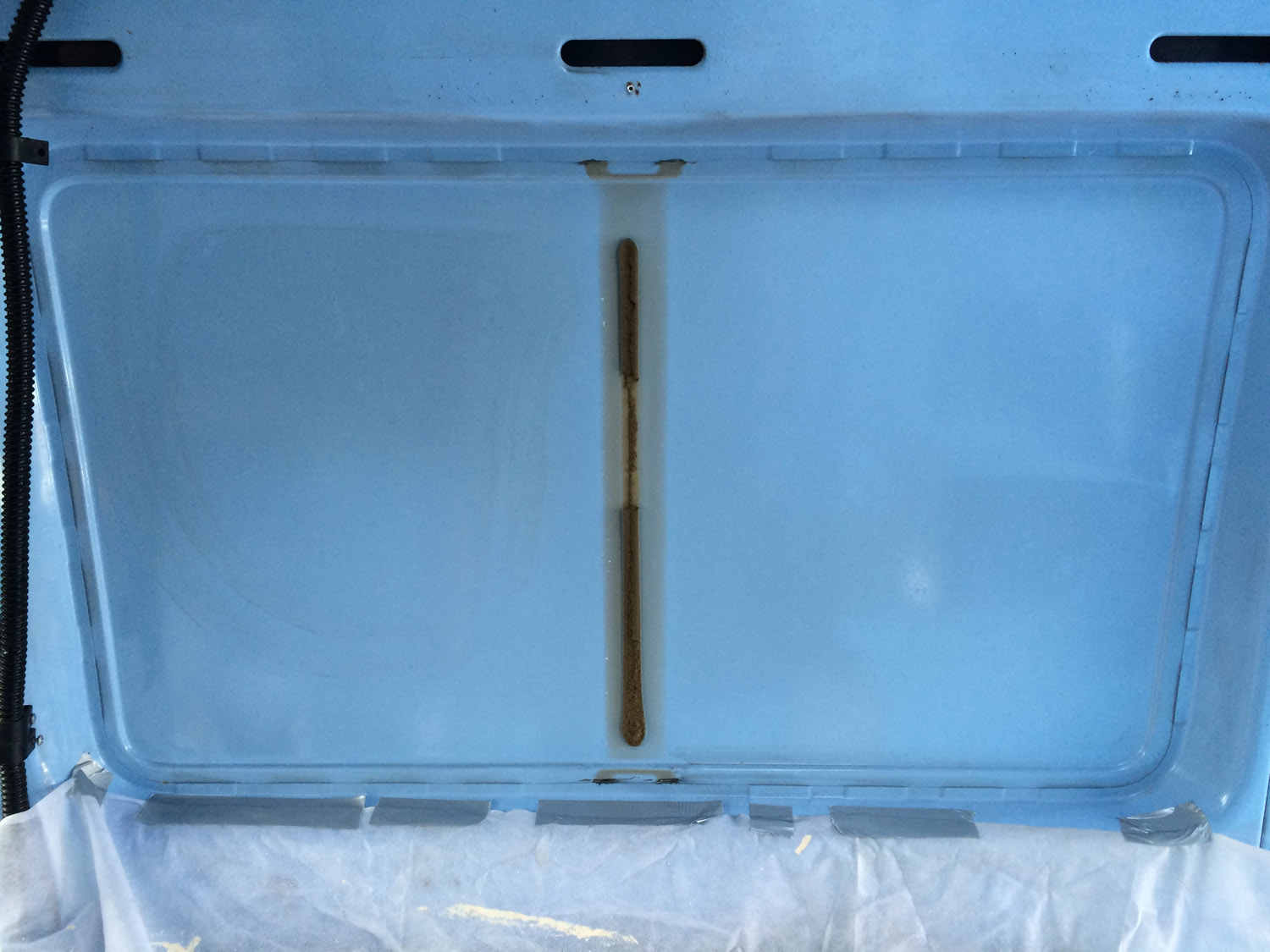 Then, masked the outside off – I put plenty of tape on incase of slippage with the blade or to make the cleanup of stray adhesive easier – needn’t have worried. 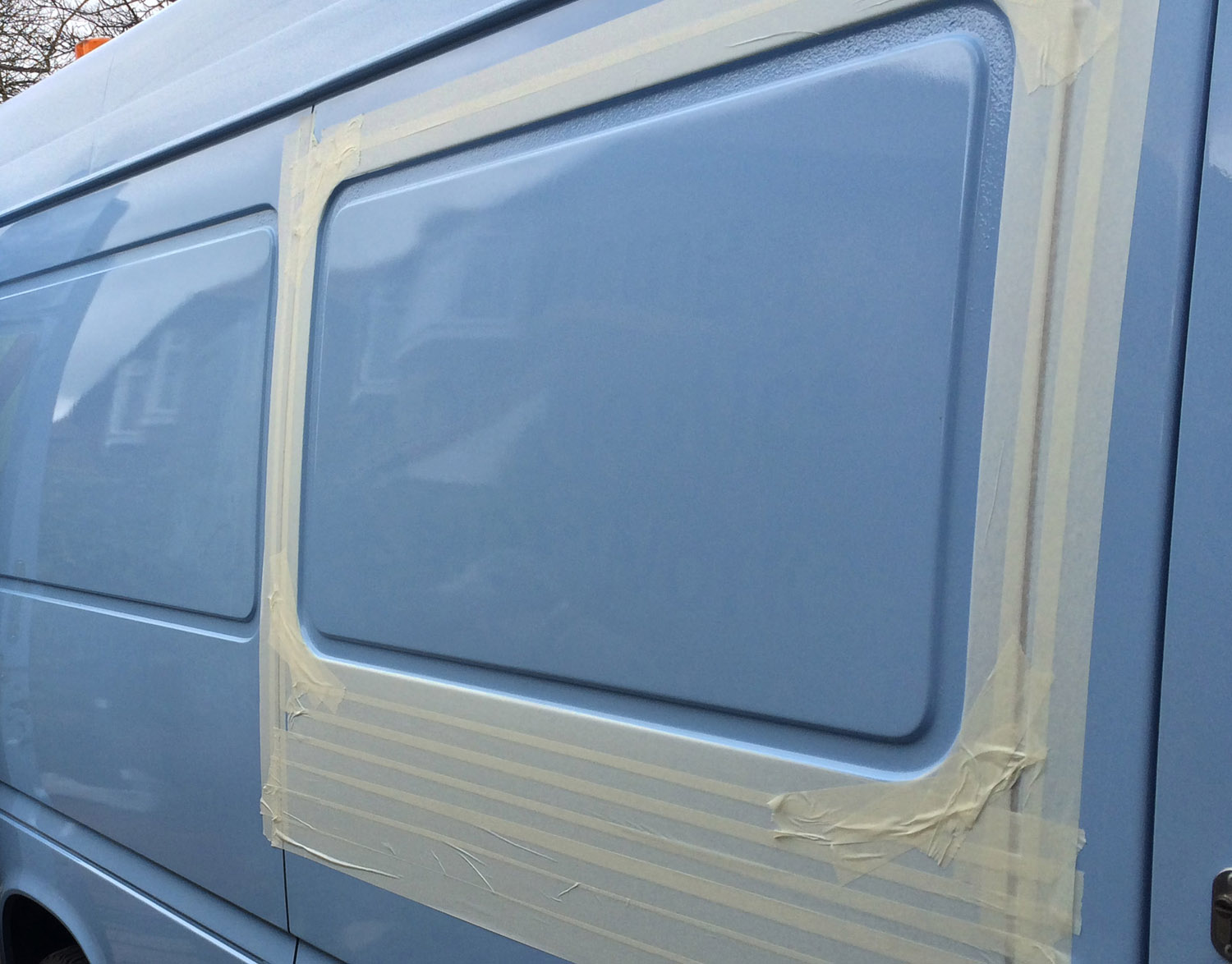 Drilled a pilot hole in each corner to accommodate the jigsaw and took my time tracing the line. Assistance required to hold the panel as it came out. Worst bit of the process, those tiny metal shards from the jigsaw get everywhere, aghh! Look, a hole: 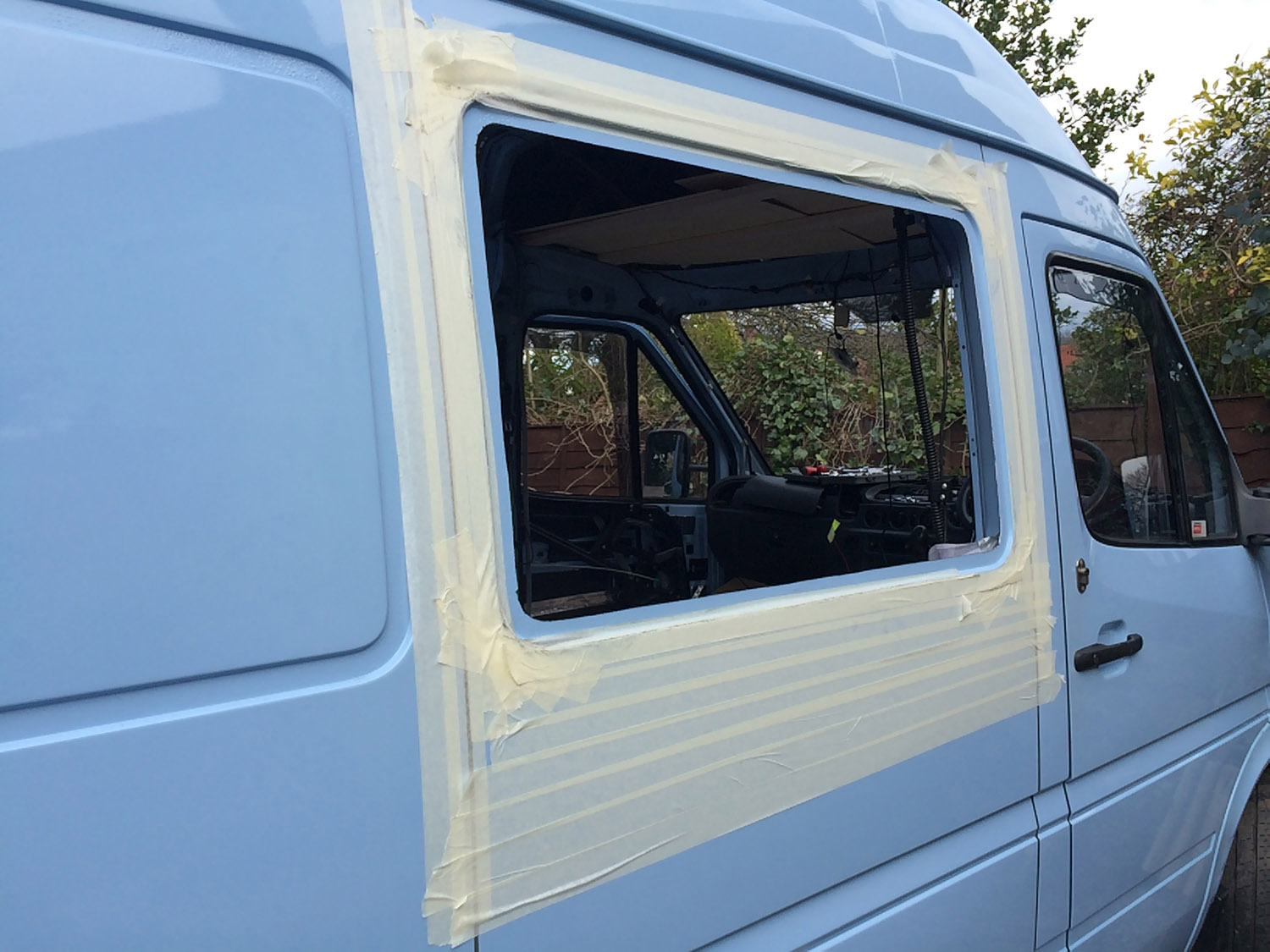 Filed off and painted the bare metal edges with primer, then Rustoleum, left it to dry overnight. 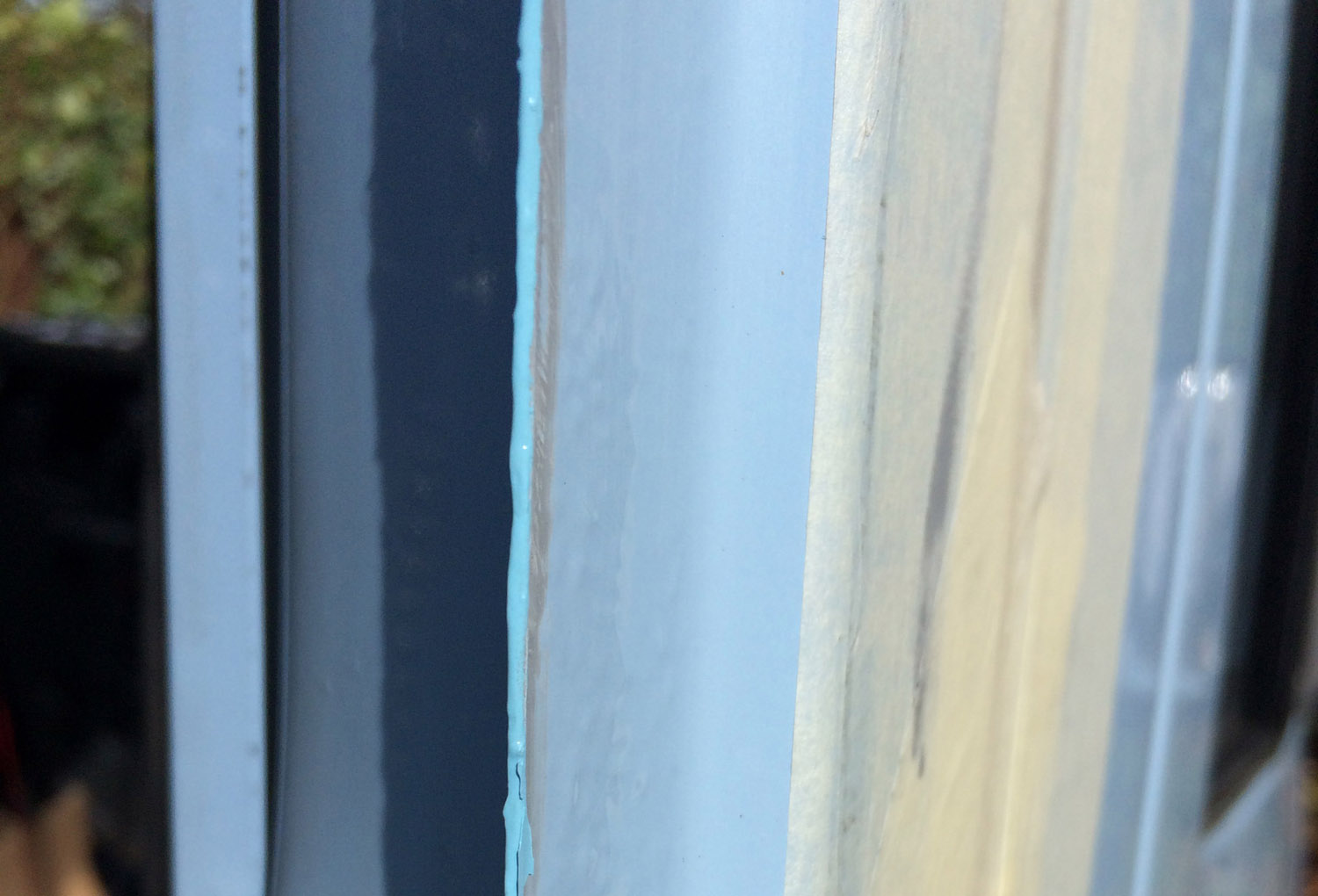 Then put the knock on rubber trim in place. Look, a big hole in the other side: 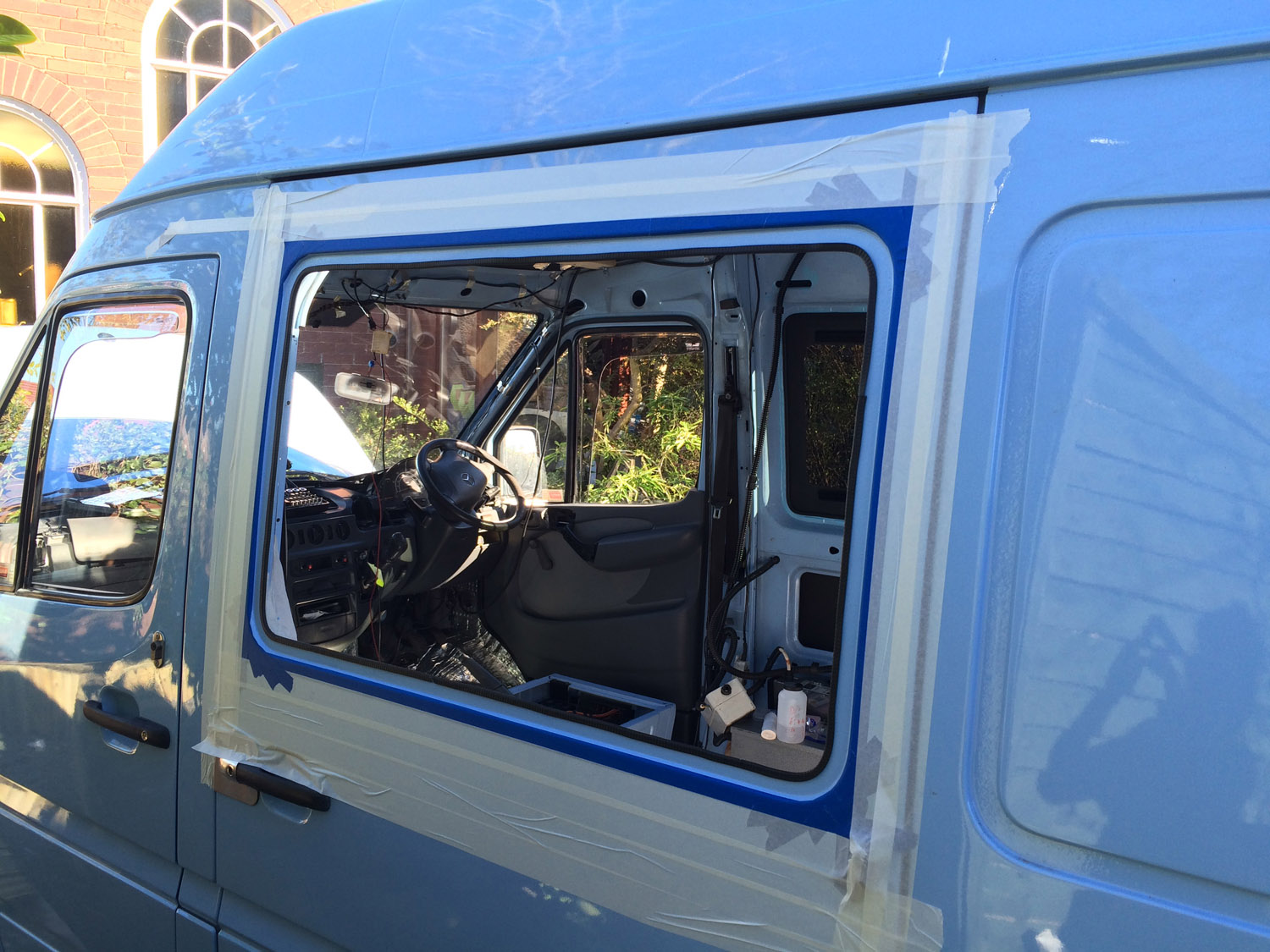 The kit came with cleaning wipes to prep both the rear of the glass as well as the bodywork itself. I roughed the paint up with a Scotchbrite pad too, as recommended, just to help with adhesion. Warmed up the bonding goop (?!) in warm water before application which helped, but it was still pretty tough going with the caulking gun. Ran a single continuous bead all the way round, then carefully lifted the glass into place. Two person job! 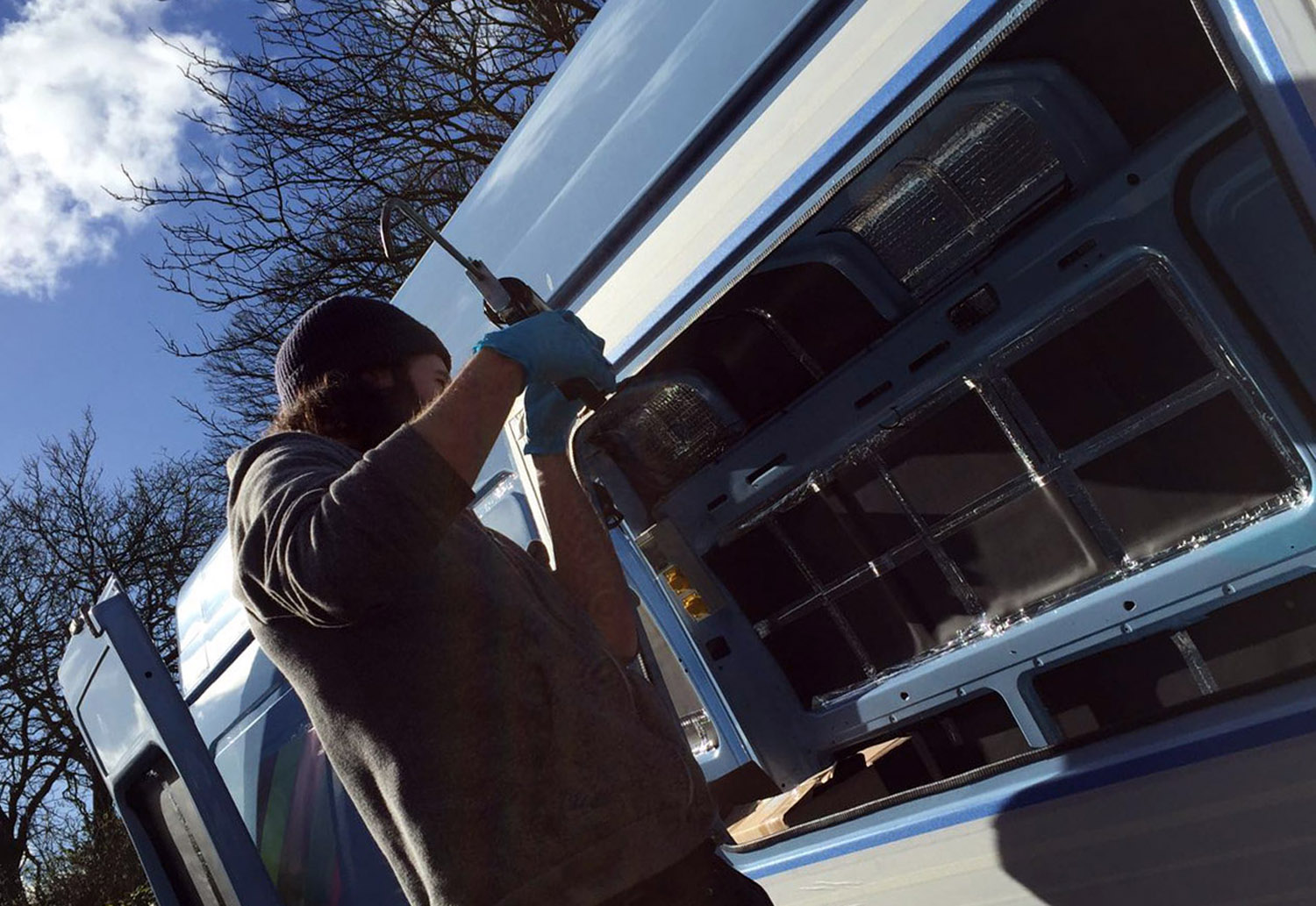 Put a cardboard spacer at the bottom to ensure the gap was even all around but the bond was so good from the off it wasn’t really necessary. Taped it up then left overnight, hoping it doesn’t fall out. 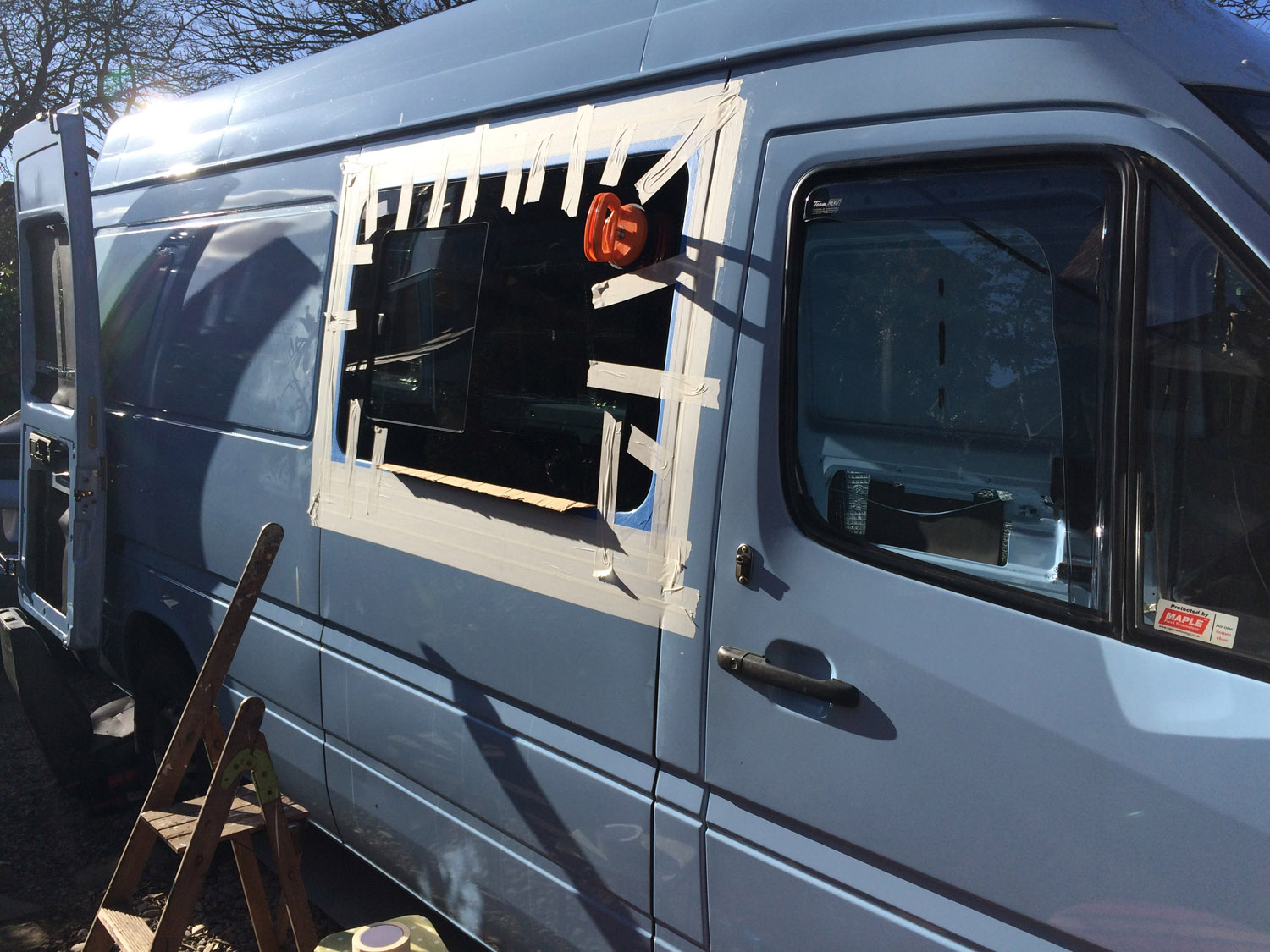 The finished window from the inside: 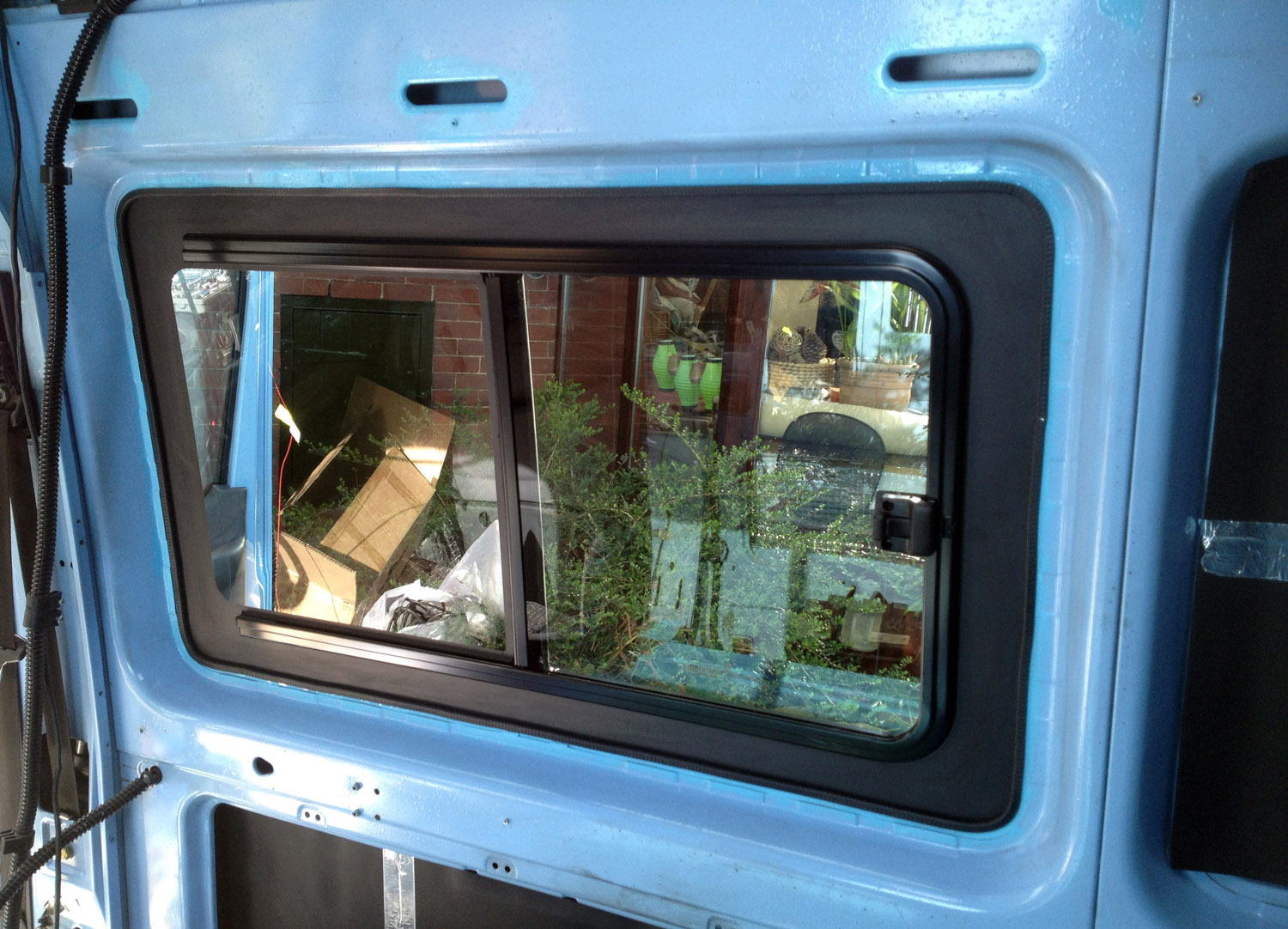 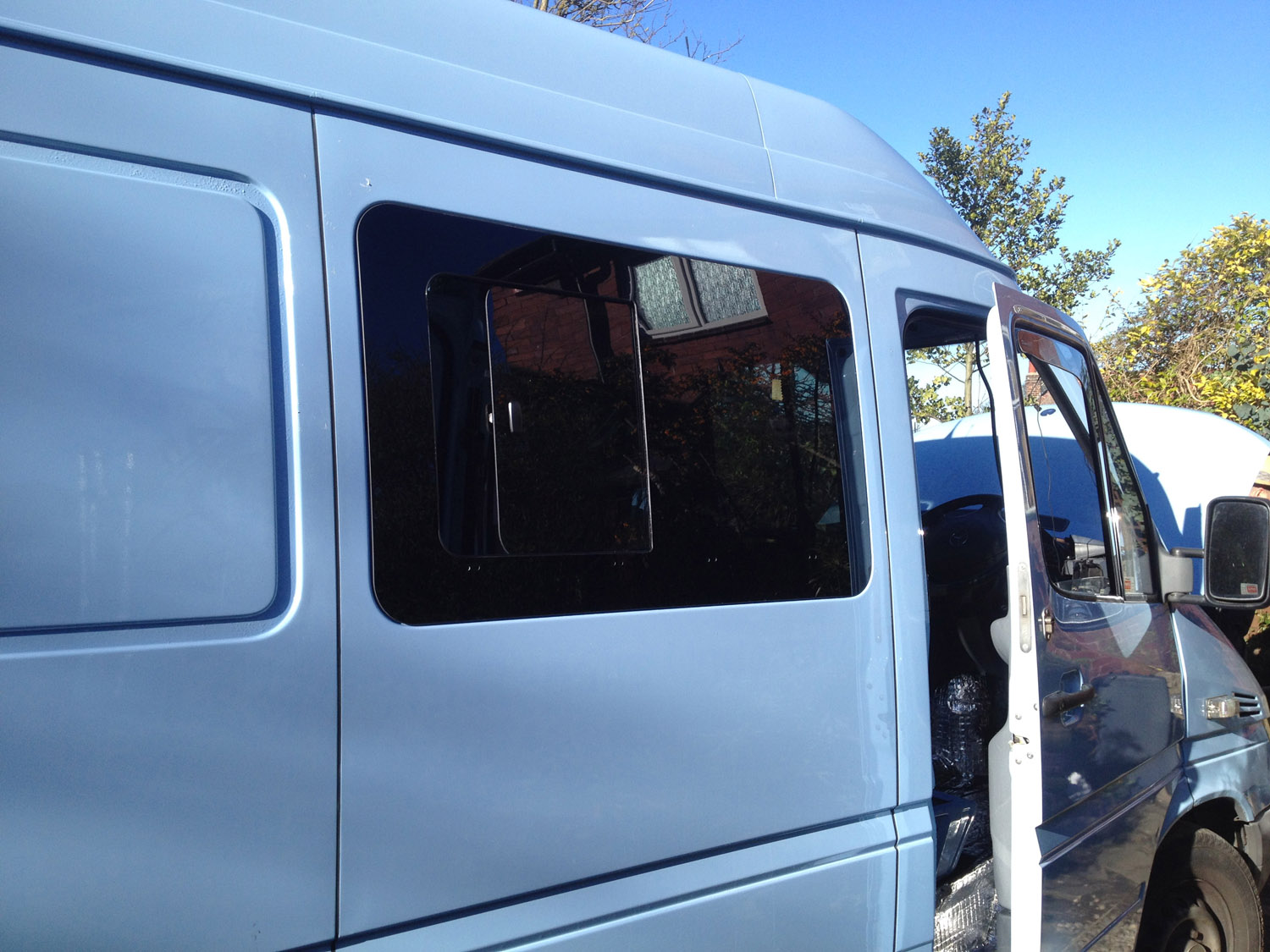 Looks factory fresh, with a real nice sliding action. There doesn’t seem to be right or wrong way to fit the windows, ie placing the slider towards the front or the rear of the van. I chose to have the slider towards the back – my logic being, if driving in heavy rain then the water would run away from the seal in the centre of the glass instead of towards. Probably makes no difference either way, but it all helps I guess.

Ran a pretty vicious hosepipe test the next day and no leaks. Had some heavy rain in the following weeks and also fine, phew!