With the windows in, thoughts turned upwards…to the roof. I was really keen to have a source of natural light, and potentially some means of forced ventilation. The van had a fixed Mercedes factory sunroof towards the front, which turned out to leak in heavy rain. 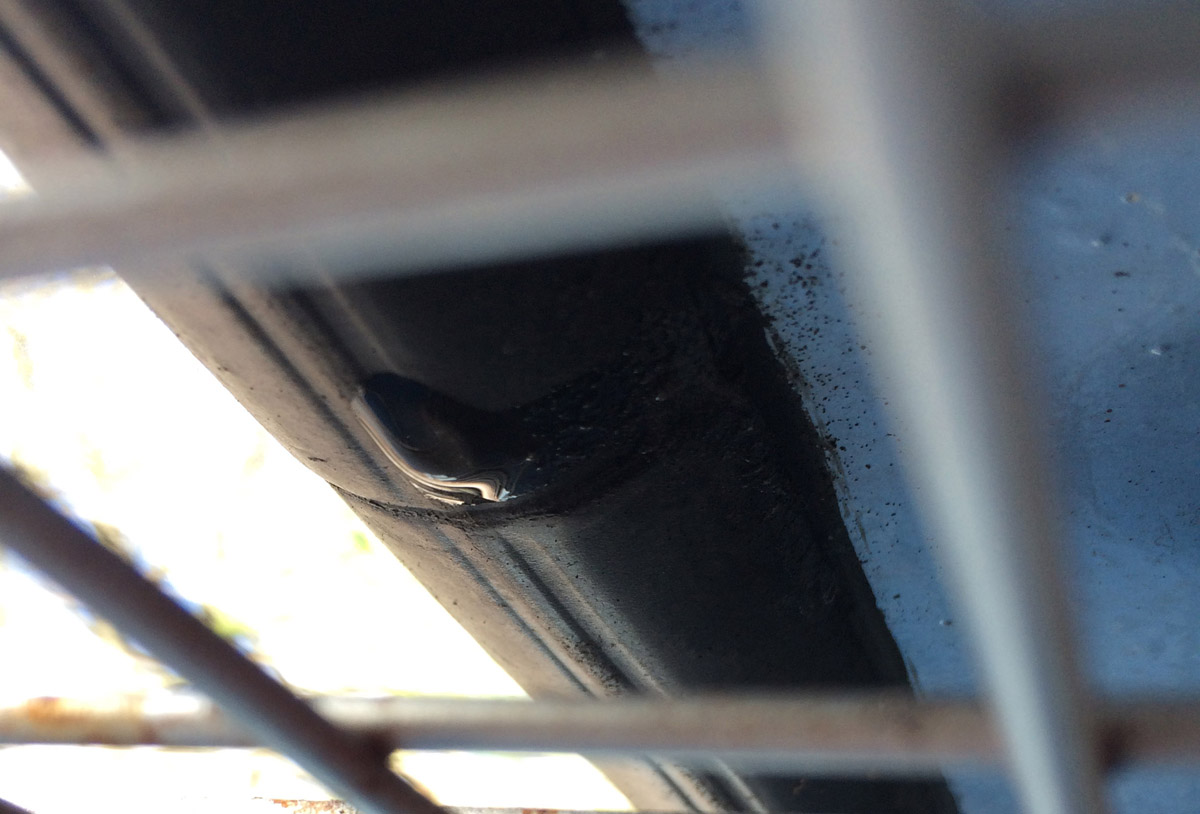 Not forgetting the later addition of a security mesh, giving some grim prison van vibes. It also collected water in the corners after showers which took an age to dry out, not great. 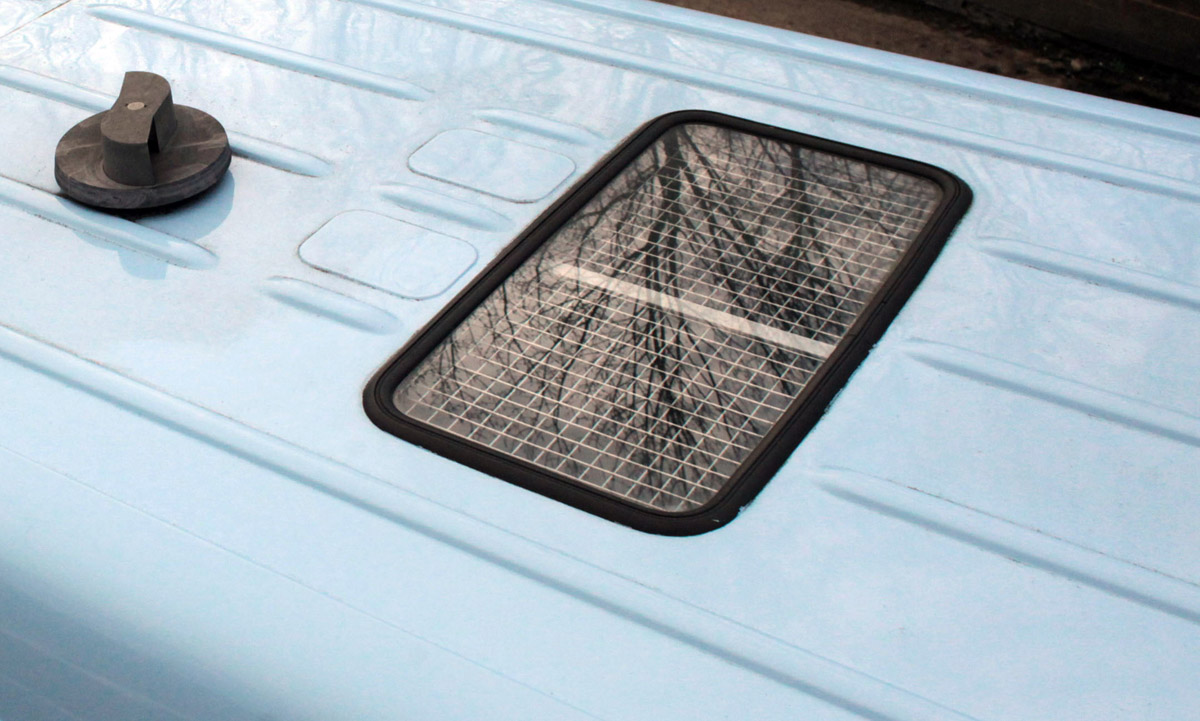 Something had to change. I weighed up my options:

I decided I didn’t want to retain the original sunroof, for the reasons above. The dilemma was, it was such an odd size that no aftermarket roof vents would fit into the hole. After scouring all the motorhome and marine suppliers (deck hatches), only significantly larger and smaller ones are available.

After much research, I decided upon a Dometic Midi Heki. This would fill the hole widthwise, but would require some work to reduce the opening lengthwise.

The Midi arrived, and in a moment of ‘ah, fuck it’ I cut out the old rubber seal and took out the glass: 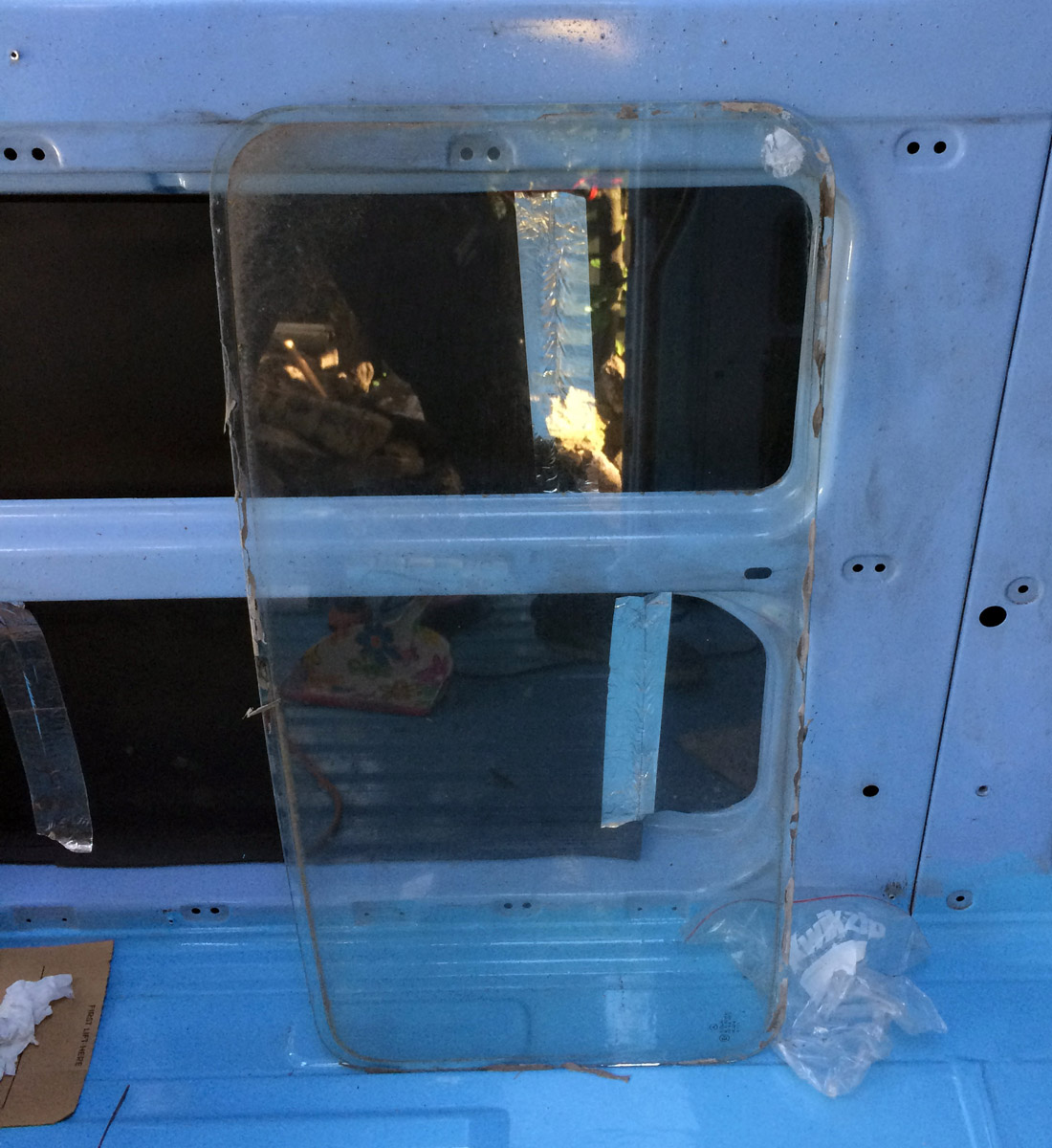 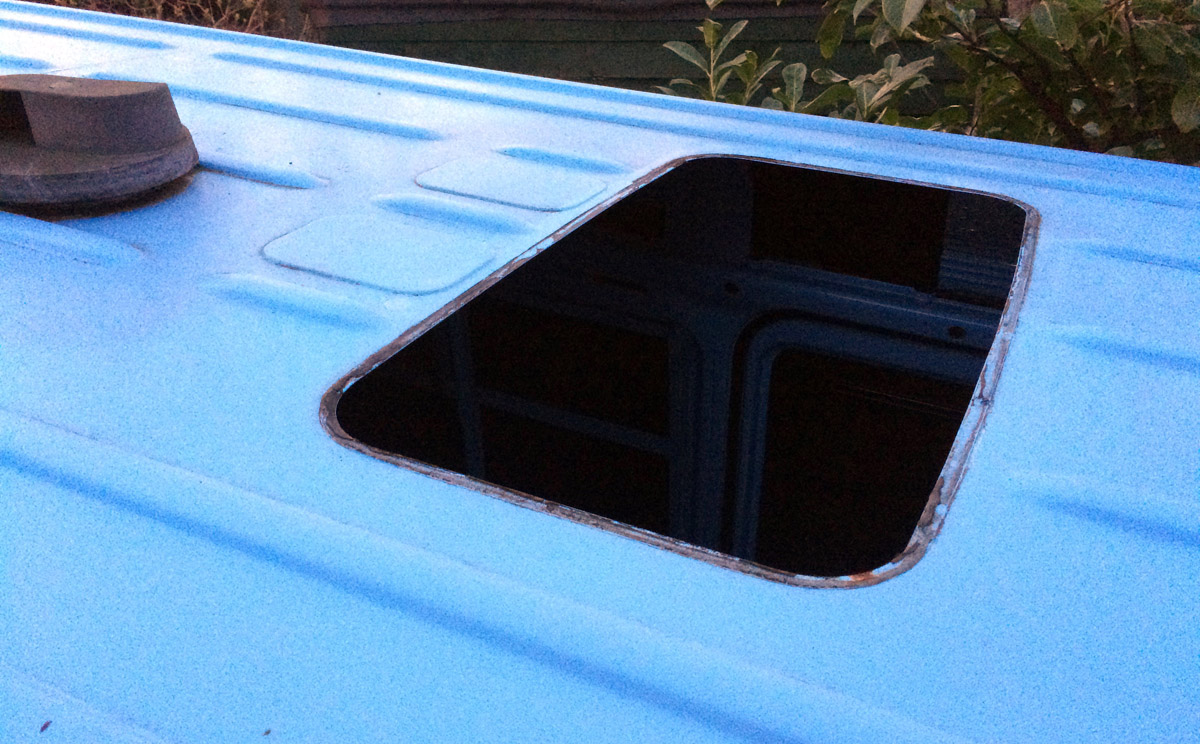 Little did I realise, the next few days were set for heavy rain. Great. Cue taping some of plastic over until the weather improved. Here’s the Heki over the hole to give an idea of size difference: 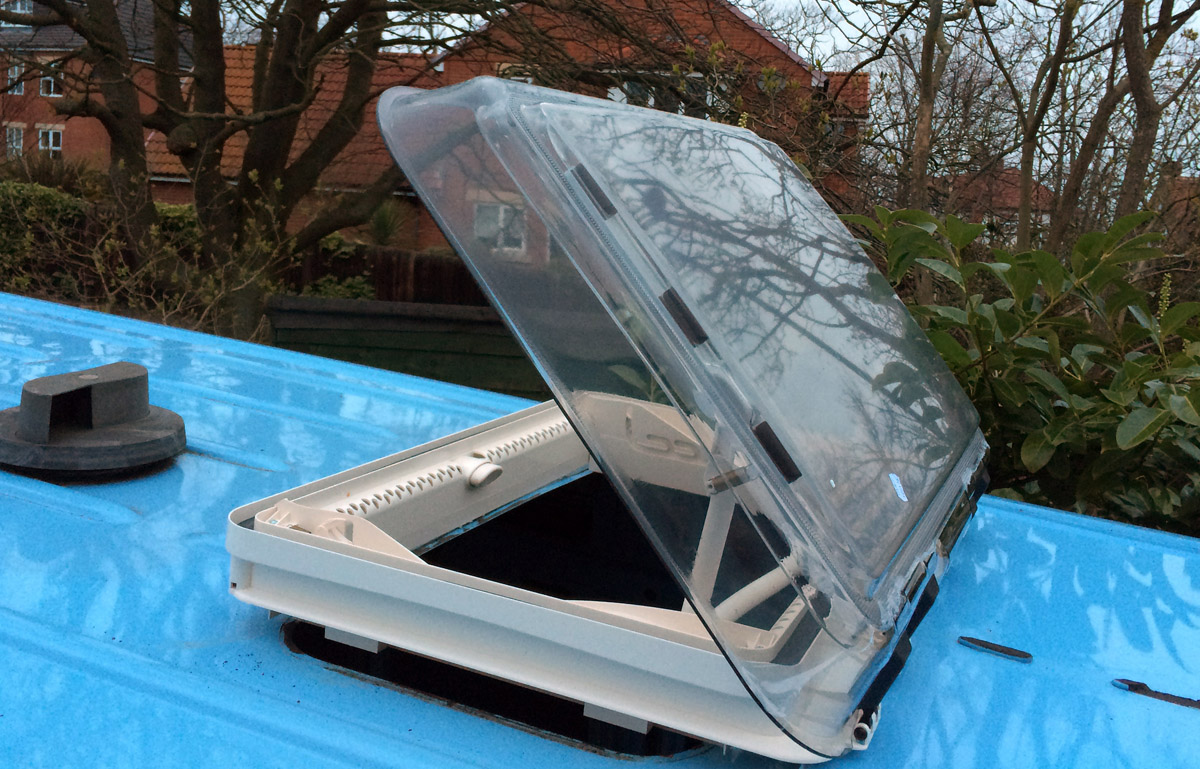 Unfortunately, the position of the supporting ribs on the inside of the van meant that the Heki would not fit easily, at least not without cutting the ribs and compromising the structural integrity of the van – something I wasn’t prepared to do. Back to square one…

After seeing so much positive talk about them online, I figured a Maxxair Maxxfan Deluxe (with remote for those lazy moments) in the existing (reduced) hole would work a treat and tick the forced ventilation box nicely. Ordered one with the smoked lid from Rainbow Customs which arrived the next day, great service. The width of the hole was almost exactly right for the Maxxair frame, only two side pieces would need to be fabricated to fill the hole, and no extra cutting. Got the seal of approval: 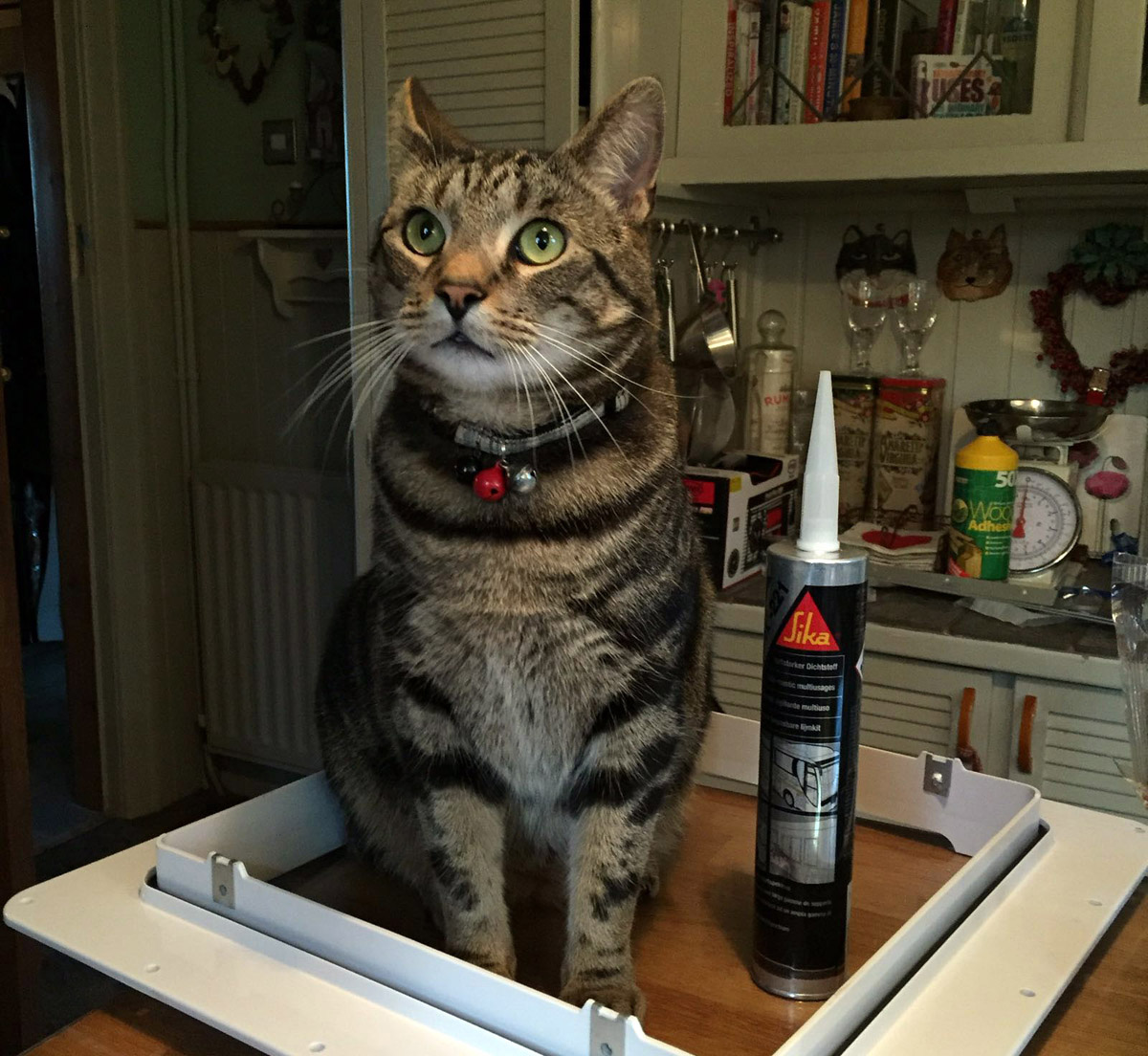 I’d kept the sheet metal from the window cutouts which was ideal for the fill in panels. Measured up, cut them out: 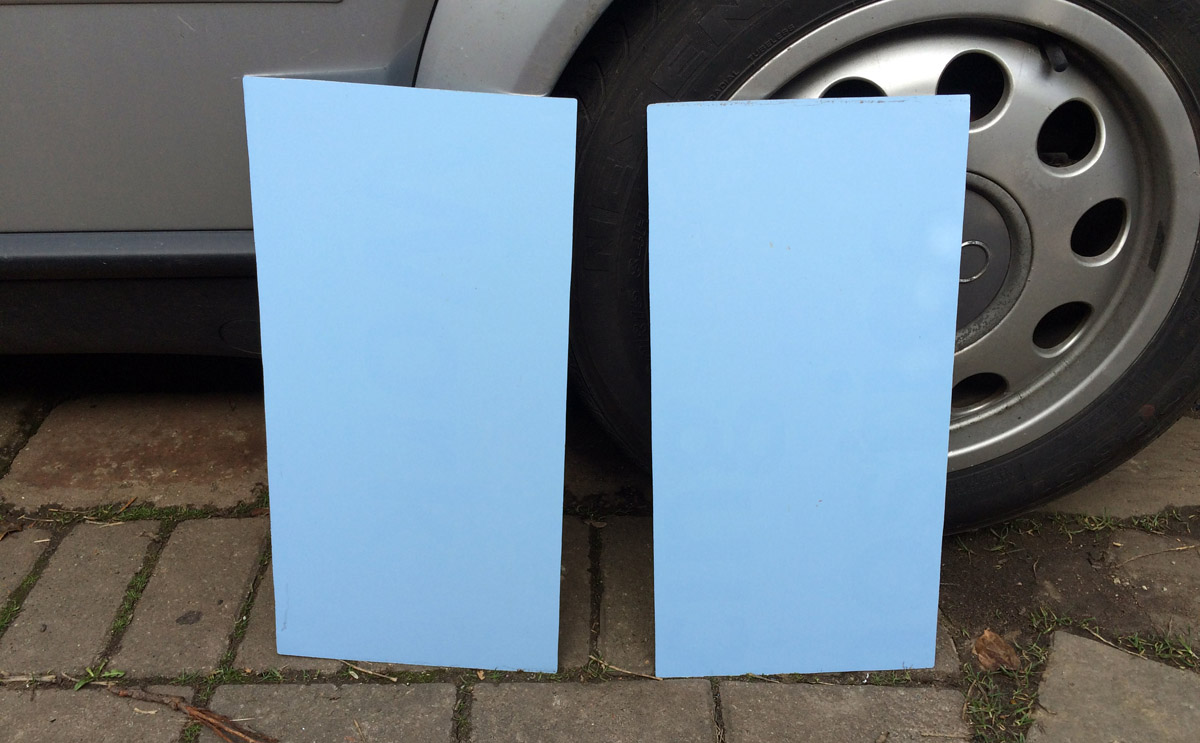 And trial fitted into place, with and without the Maxxair frame: 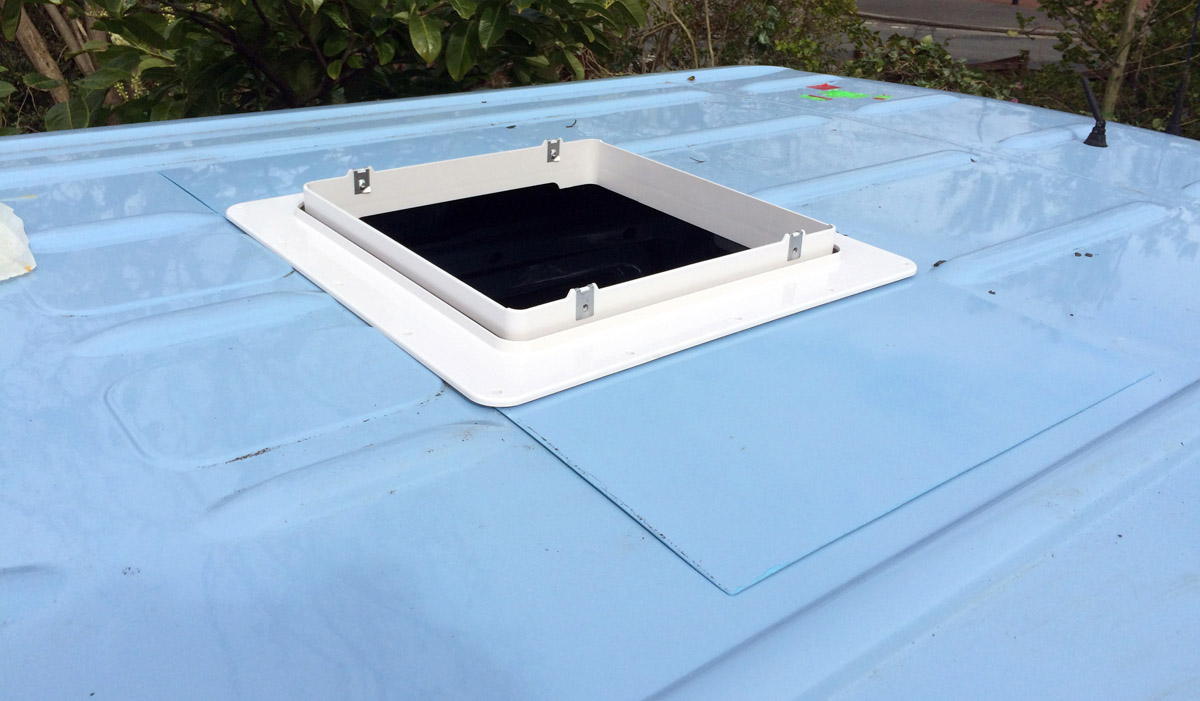 Once I was happy with the positioning I temporarily taped them to the roof and drilled 9 holes each side. 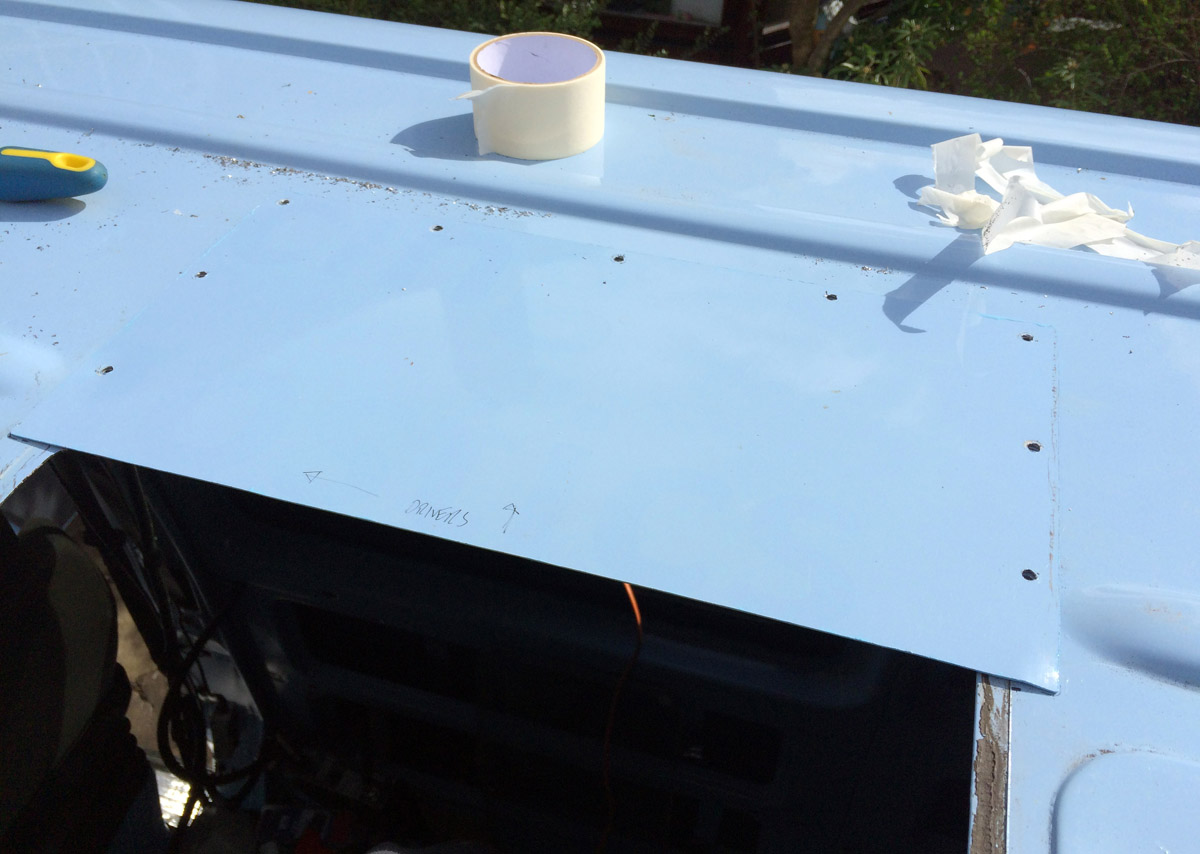 Rustoleum over the bare metal and cleaned up formerly rusty bits: 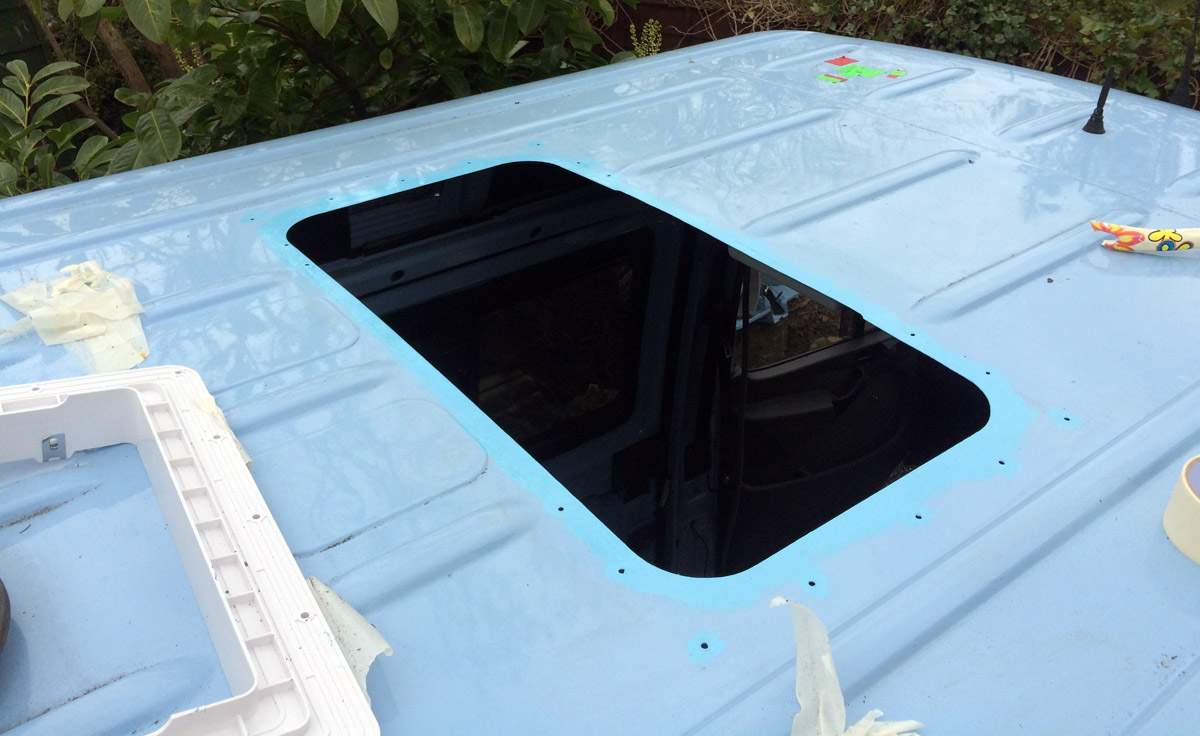 The method I used to secure the repair panels was A2 stainless bolts & nyloc nuts, a line of W4 Mastic sealing strip around the holes, and everywhere else Sikaflex Sikalastomer 710 – butyl based sealant which never fully sets. It is pretty awkward to work with, sticks to everything, but won’t crack or dry out. This means that should I ever need to remove the panels, it’ll not be too much of an issue. I could’ve welded the panels in but I can’t weld, and decided the risk of the heat distorting the roof and/or the repair plates wasn’t worth taking. 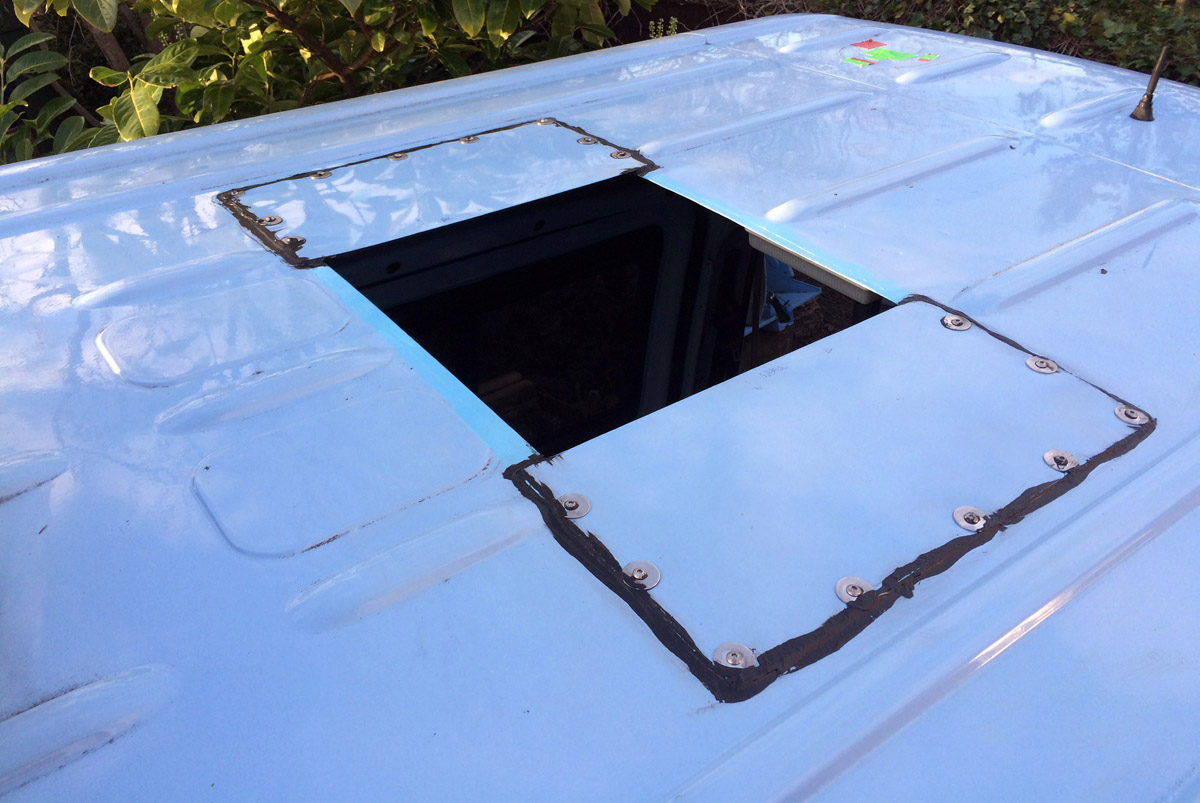 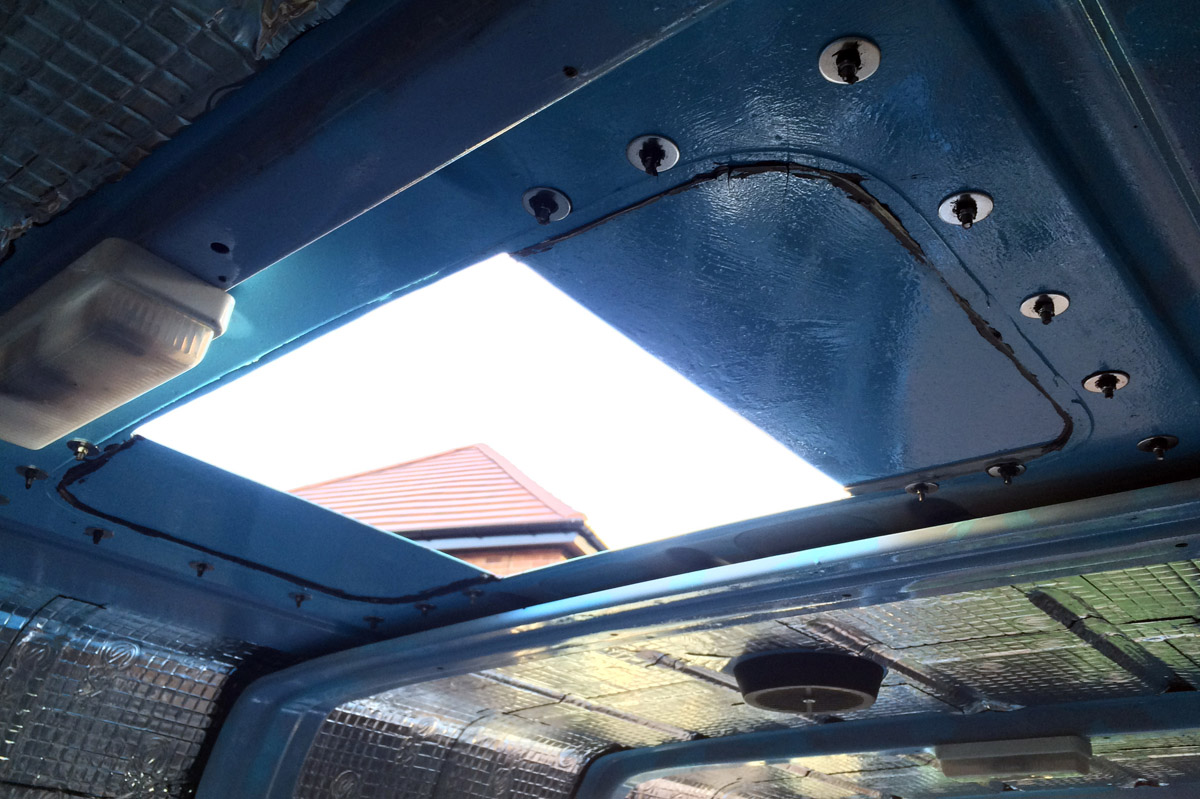 Not the neatest looking scene at the minute, but really pleased with how solid this is, feels stronger than the rest of the opening. Went overboard with the Sikalastomer and did both inside and out, very confident this will withstand the elements.

With everything ready, I moved onto the Maxxair installation. Some great install guides for this van on here, thanks to those who posted up their writeups and pics. Got me old Ma who’s good with wood to knock up a suitable frame. This makes up the required roof thickness a panel van doesn’t have to accommodate the fitting hardware. Glued and screwed: 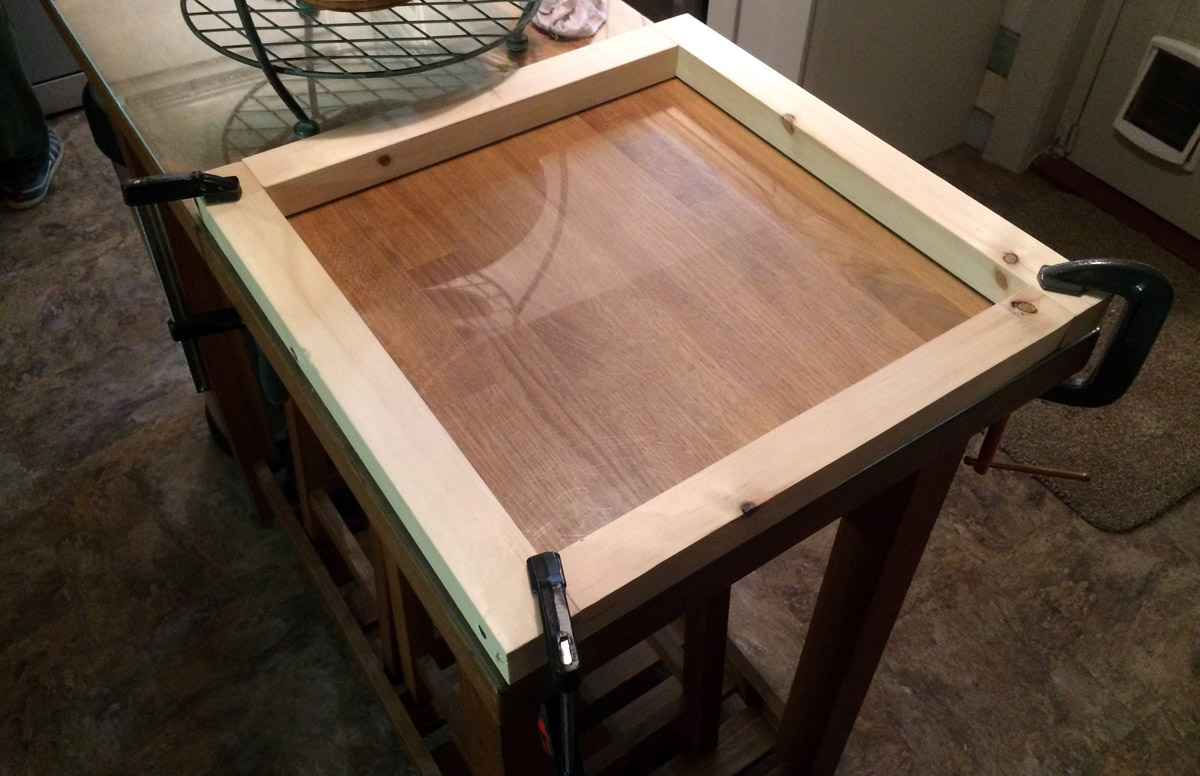 Trial fit in the van, then clamped down to drill the holes through the roof and the wood. I discarded the screws that came with the fan in favour of more robust stainless nuts and bolts which will make disassembly easier if required. 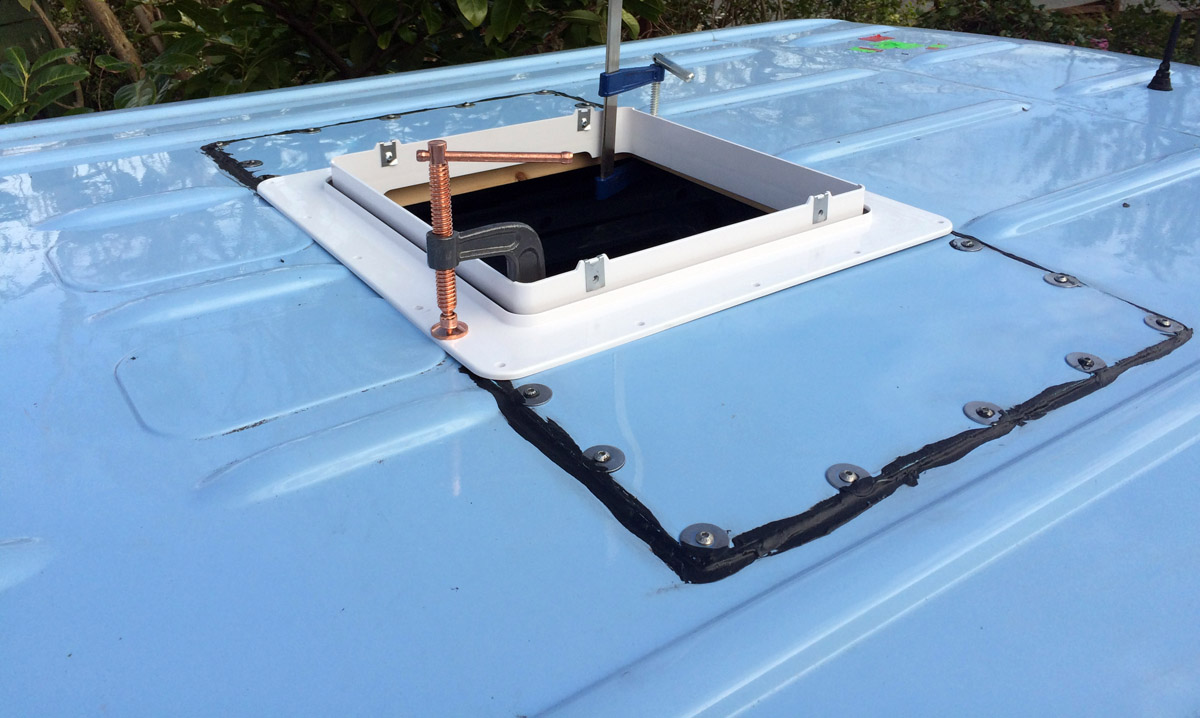 Once I was happy with the fit, and knew the bolts lined up well, I put a strip of the W4 mastic around the frame: 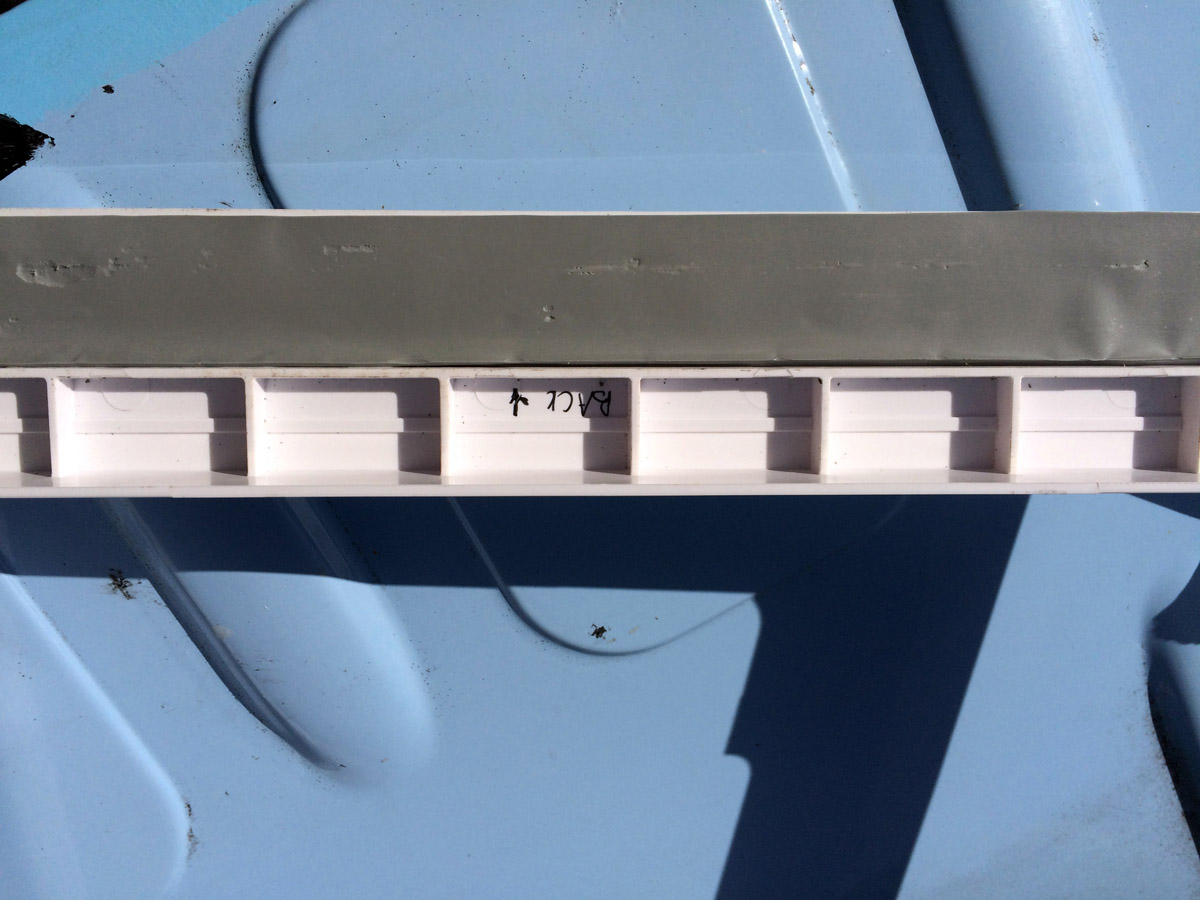 And covered the holes on the wooden frame where it met the roof. This helped to temporarily tack it into place whilst I aligned the bolt holes. 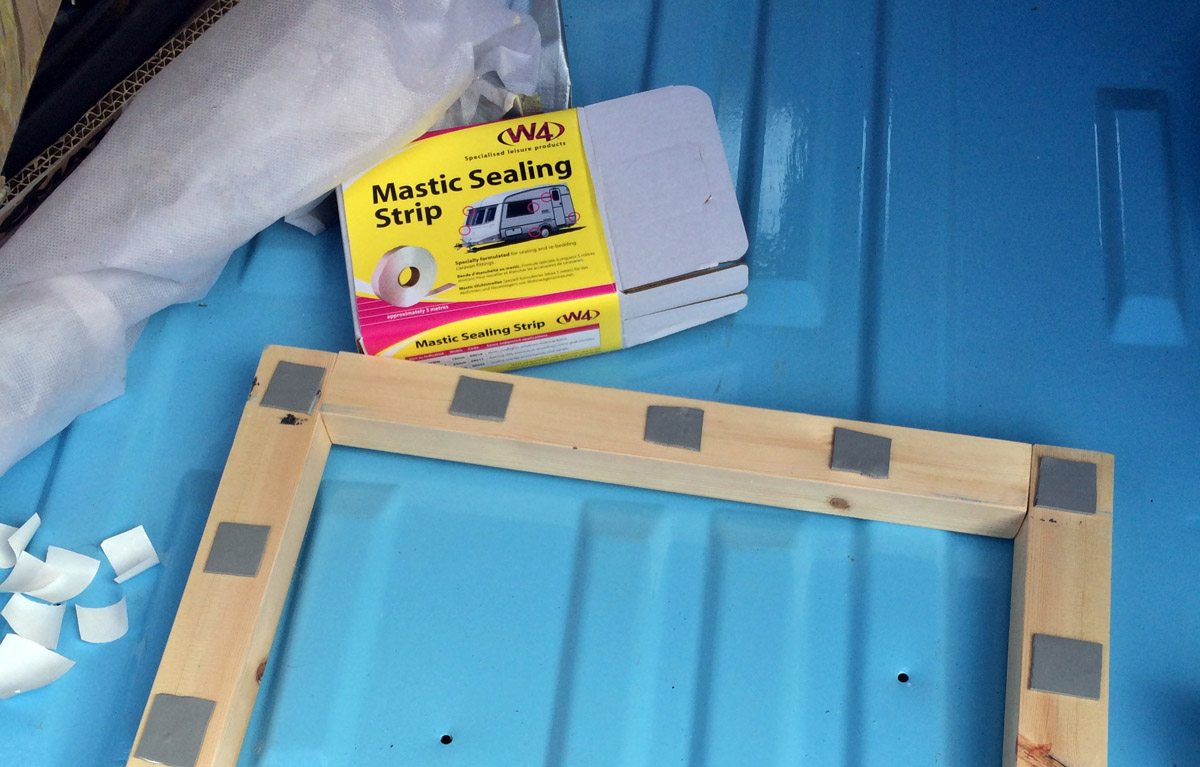 Also a line of Sikalastomer between the frame and the metal. Belt and braces approach! 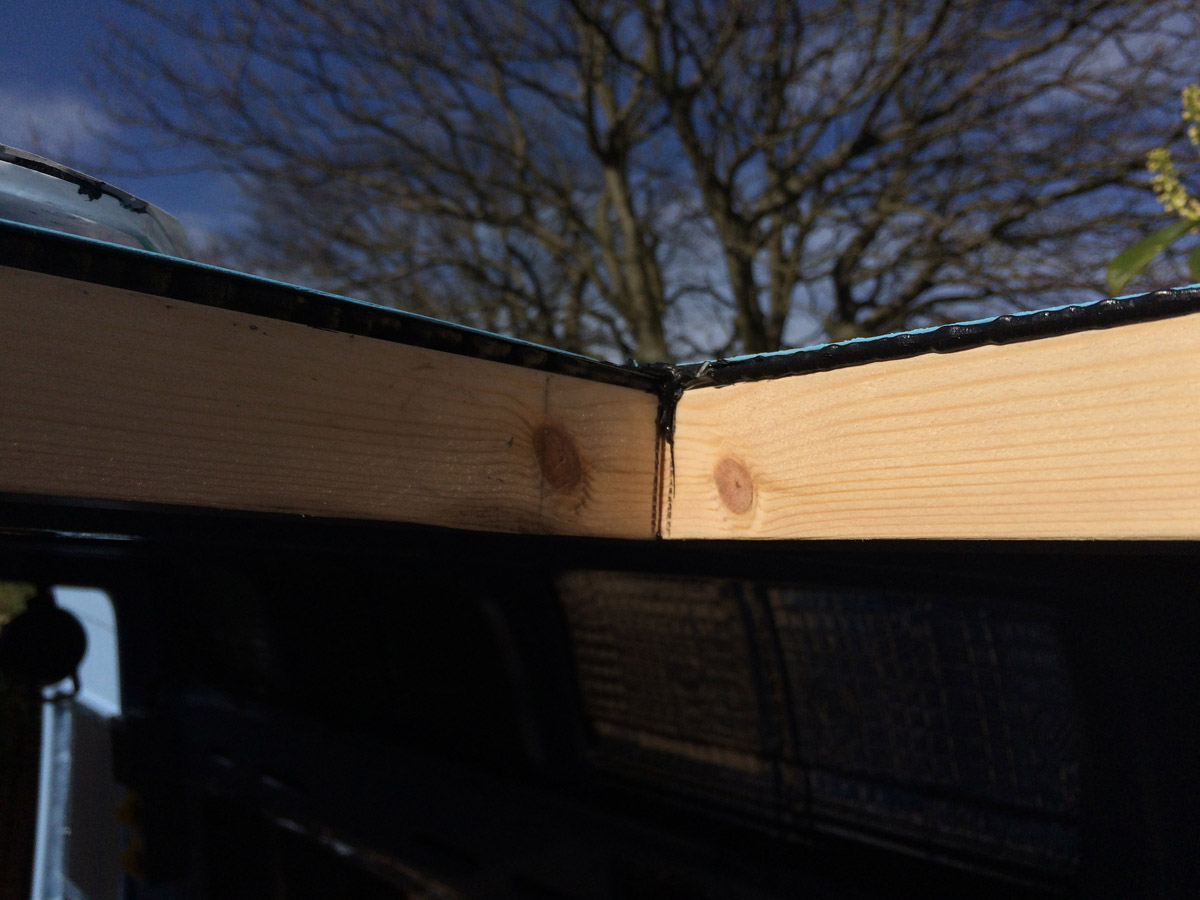 First few bolts in place. I adopted the aluminium strip method over the plastic frame to reduce the chances of the plastic splitting around the screw/bolt holes. 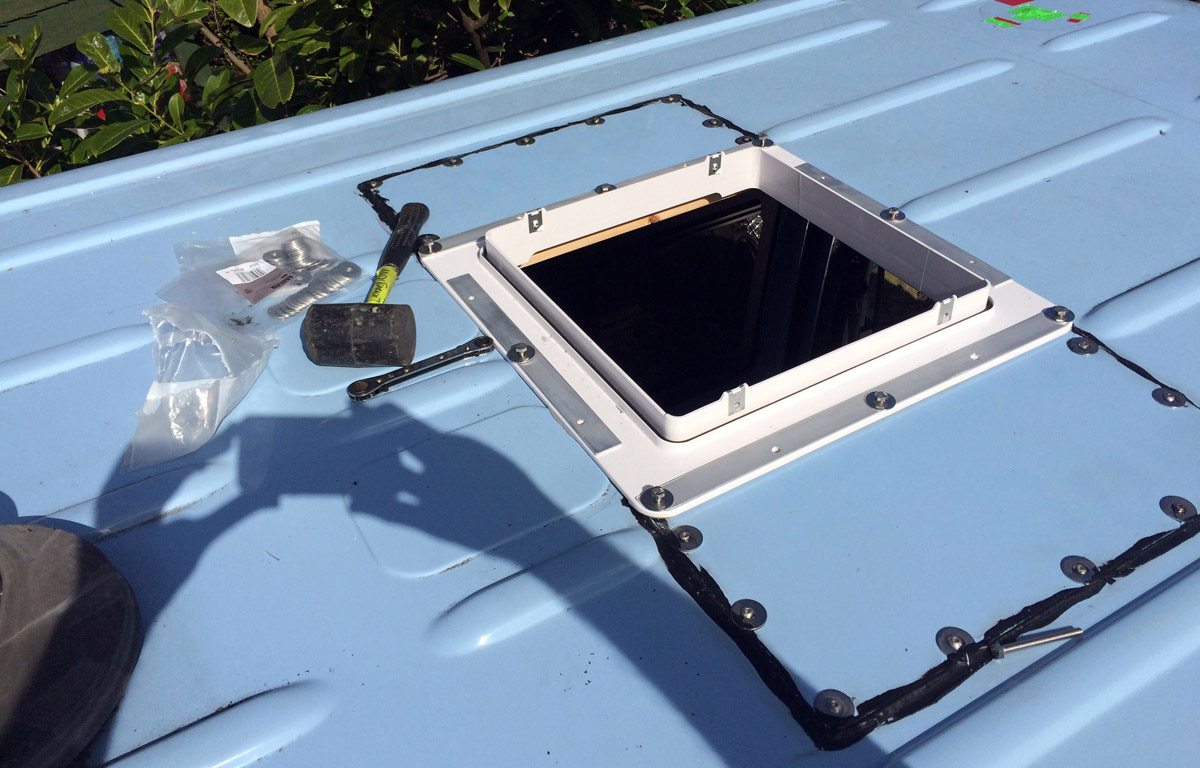 Thanks to whoever thought of this idea. A shame Maxxair don’t offer a metal frame instead of this flimsy white plastic thing – I’d pay extra. I think the extended nuts (Long ball Larry) on the inside should clear the ceiling whenever that goes in but I can always trim the excess if not.

And the final view of things bolted and bonded in place: 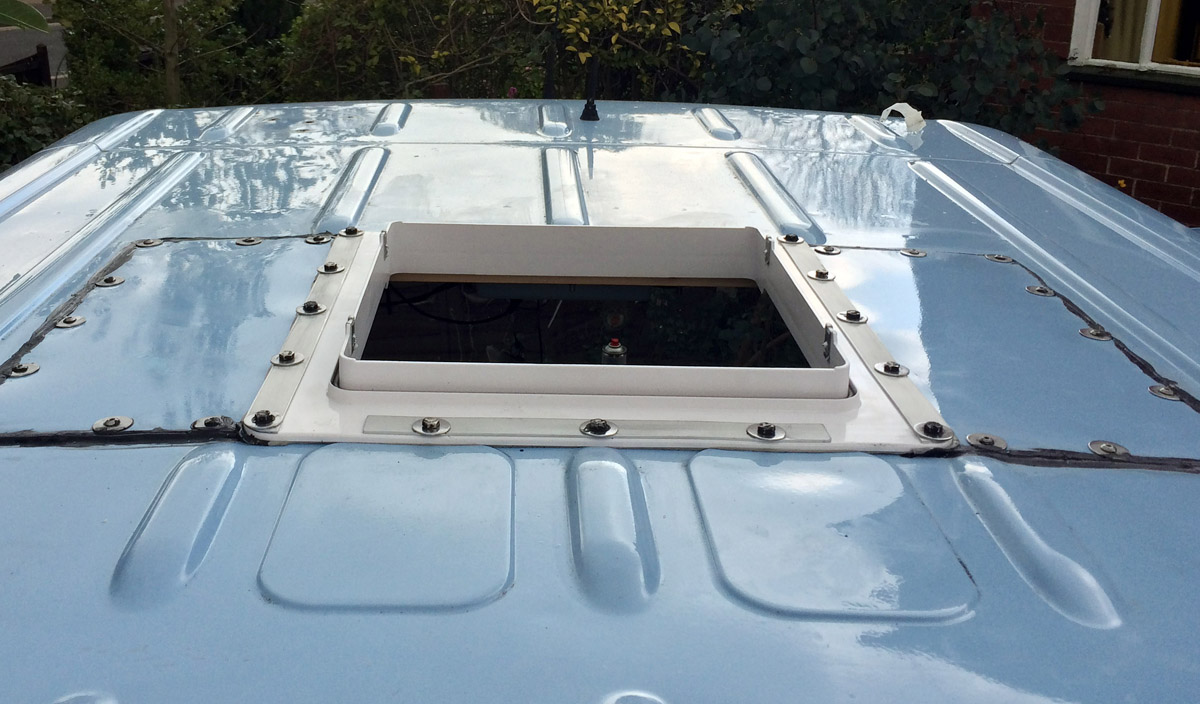 I dropped the fan unit in to see if everything fitted fine, and it did. It started absolutely pissing down with rain mere seconds after I did this – good timing indeed.

Here are the 3 stages of the inside – bare roof > silentcoat > closed cell foam: 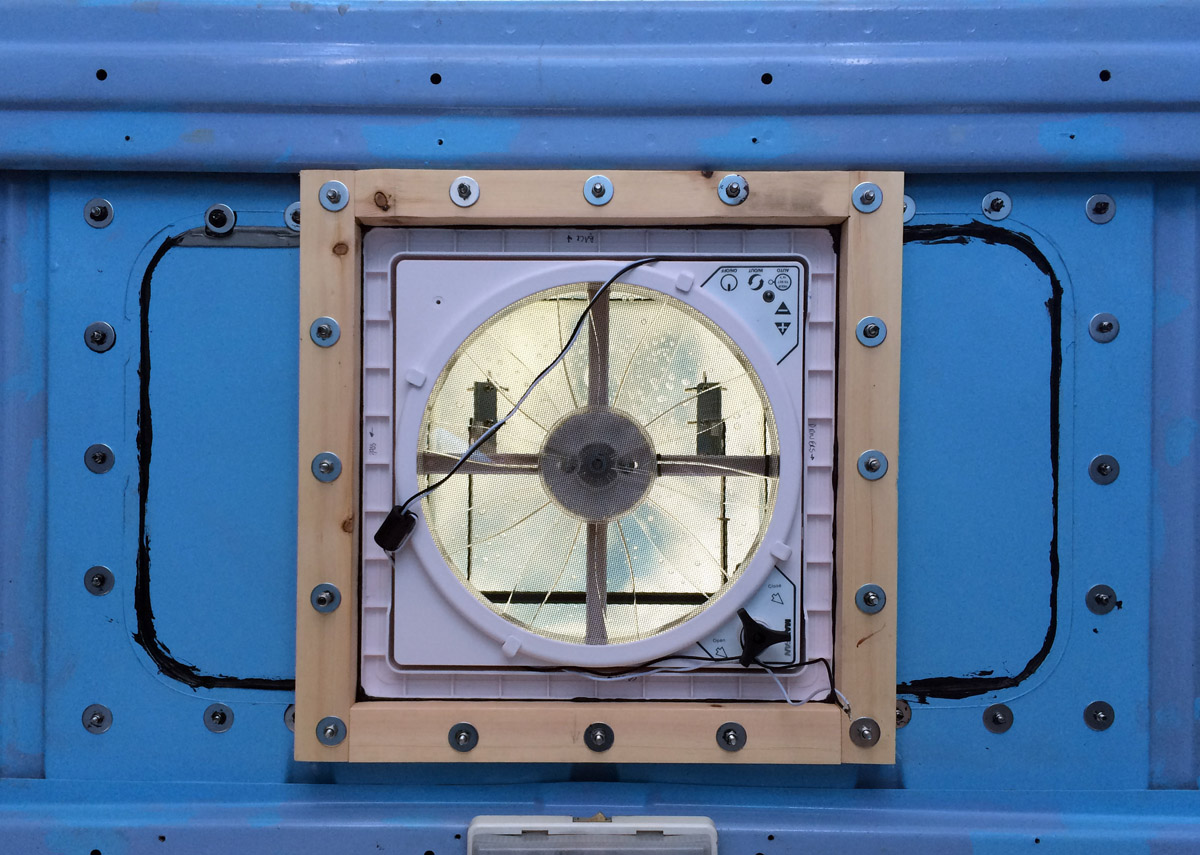 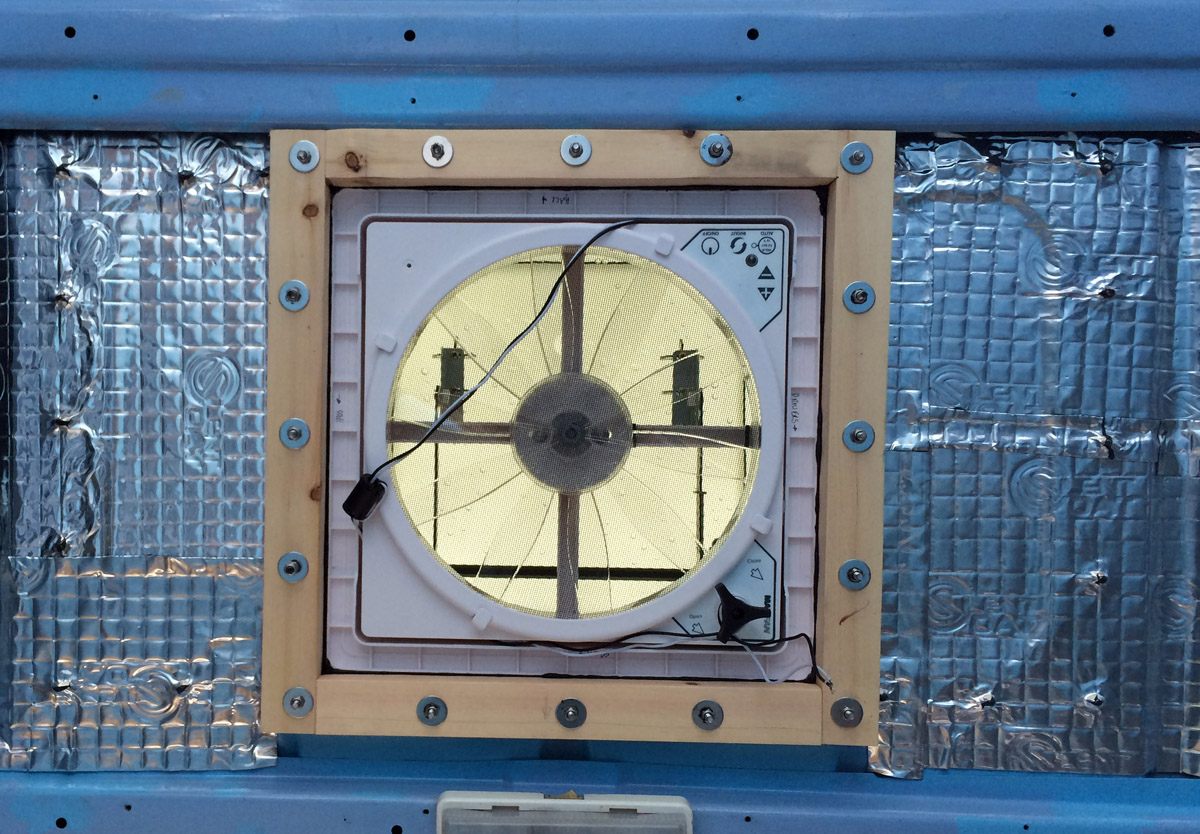 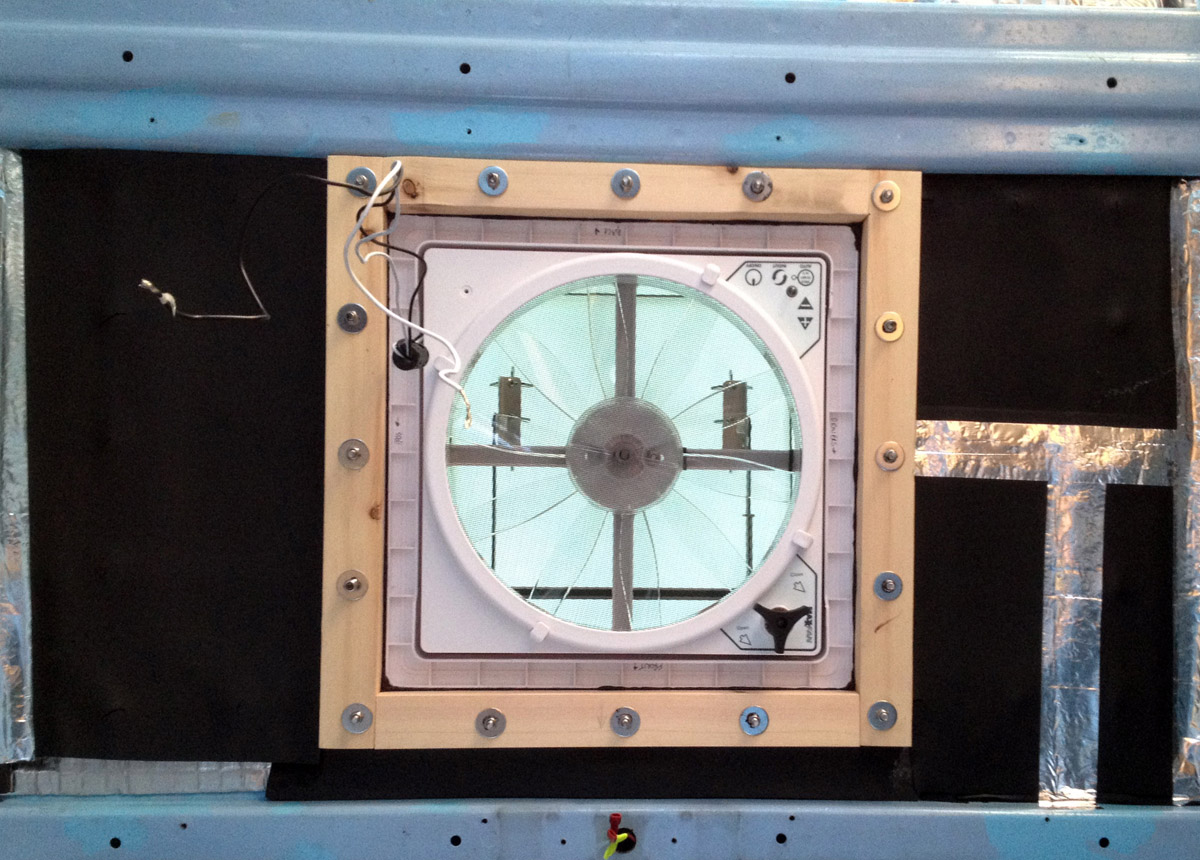 I did a quick hookup of the fan to a 12V battery and it works great – can’t believe how quiet it is. Doubt I’ll ever need to go above half speed.  Fast forward a couple of days and I finished the job off with Eternabond tape – this seems to be butyl based too and sticks to anything and everything. 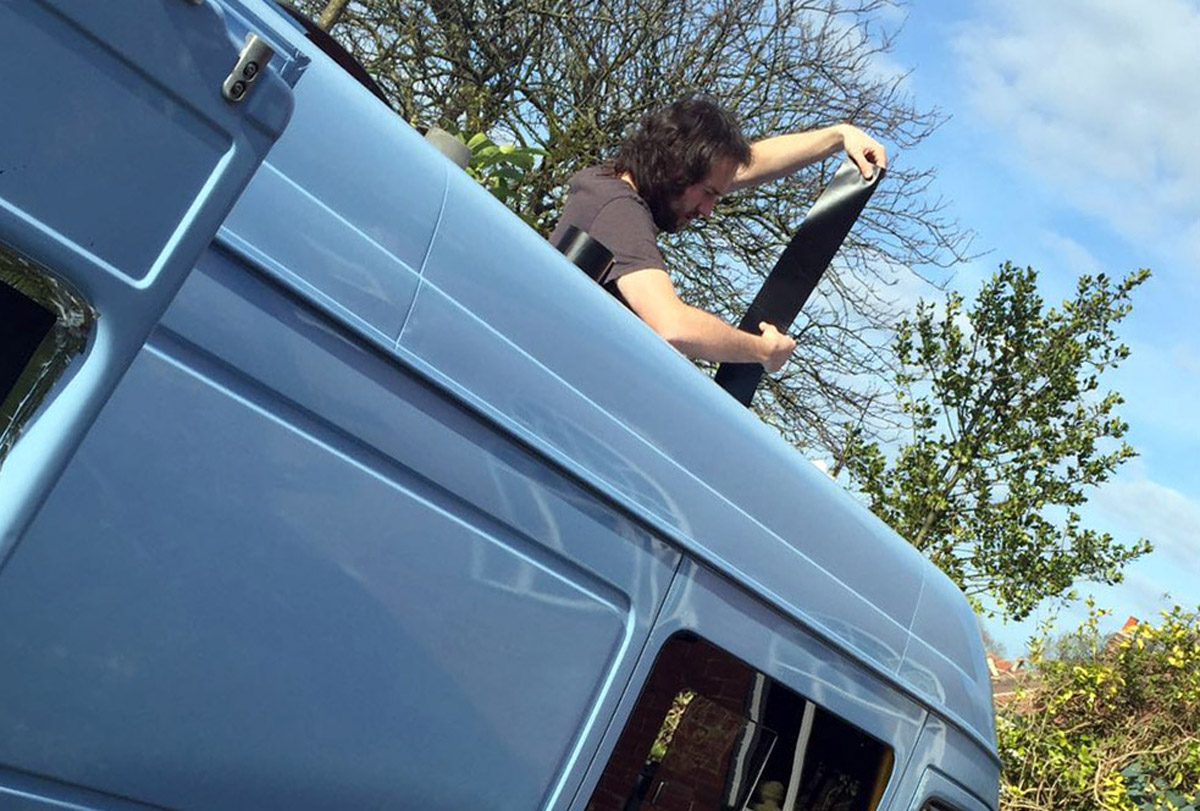 I found using a sharp stanley knife and metal ruler to cut it worked reasonably well. Covers up the white plastic frame, too – I have a severe dislike of white plastic which seems to be rife in the campervan world. Here’s the finished install, solar panels will cover those repair plates at some point which will make for a tidier looking roof: 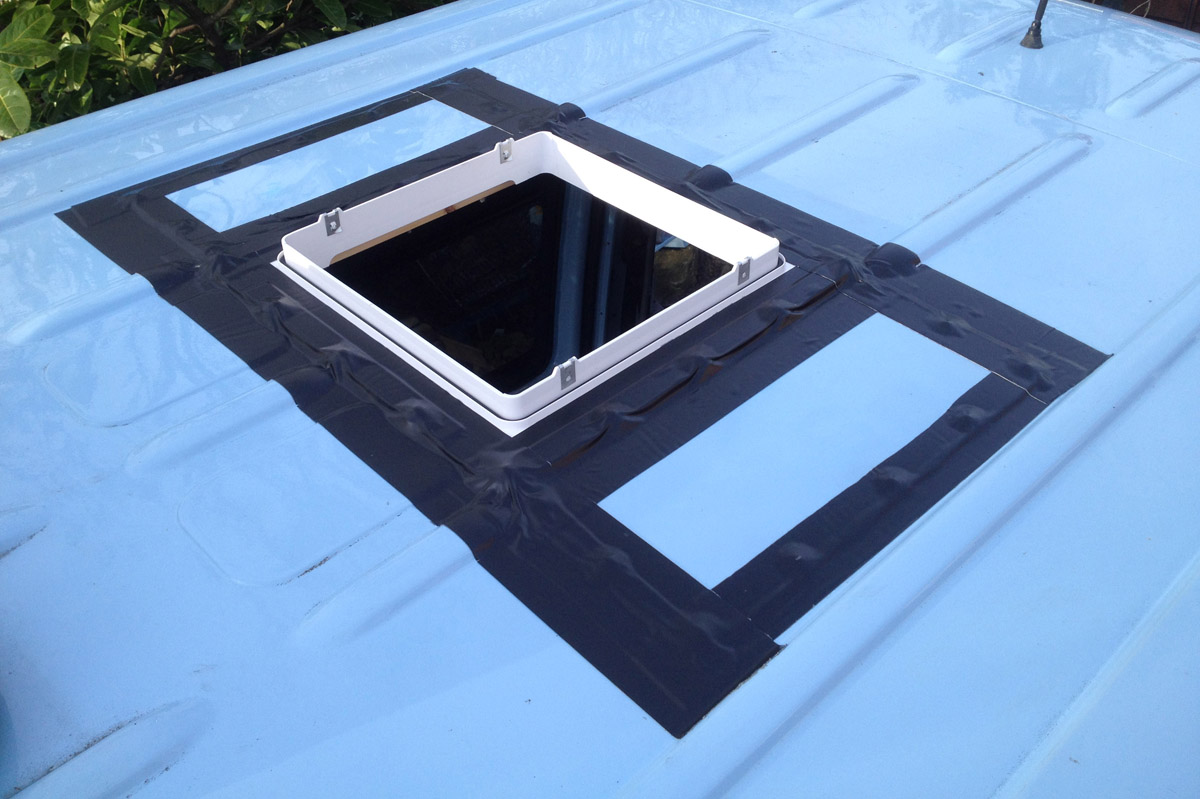 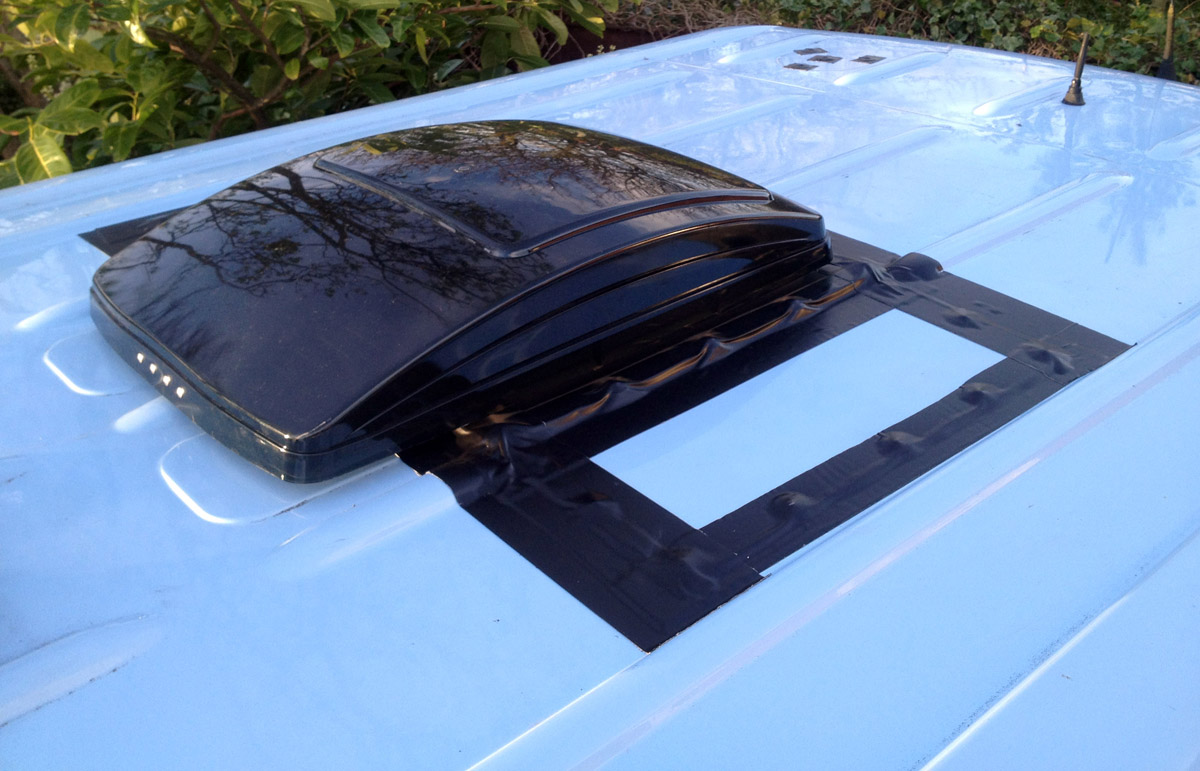 Another job I tackled whilst on the roof was to remove the amber flashing beacons. I don’t have any use for these. It did leave 4 holes at each end of the van. I chose to clean up the holes, paint the bare metal, and then put a stainless nut and bolt sealed with mastic tape through each of them. Chances are, I’ll reuse the centre holes as an entry point for the solar panel wiring. 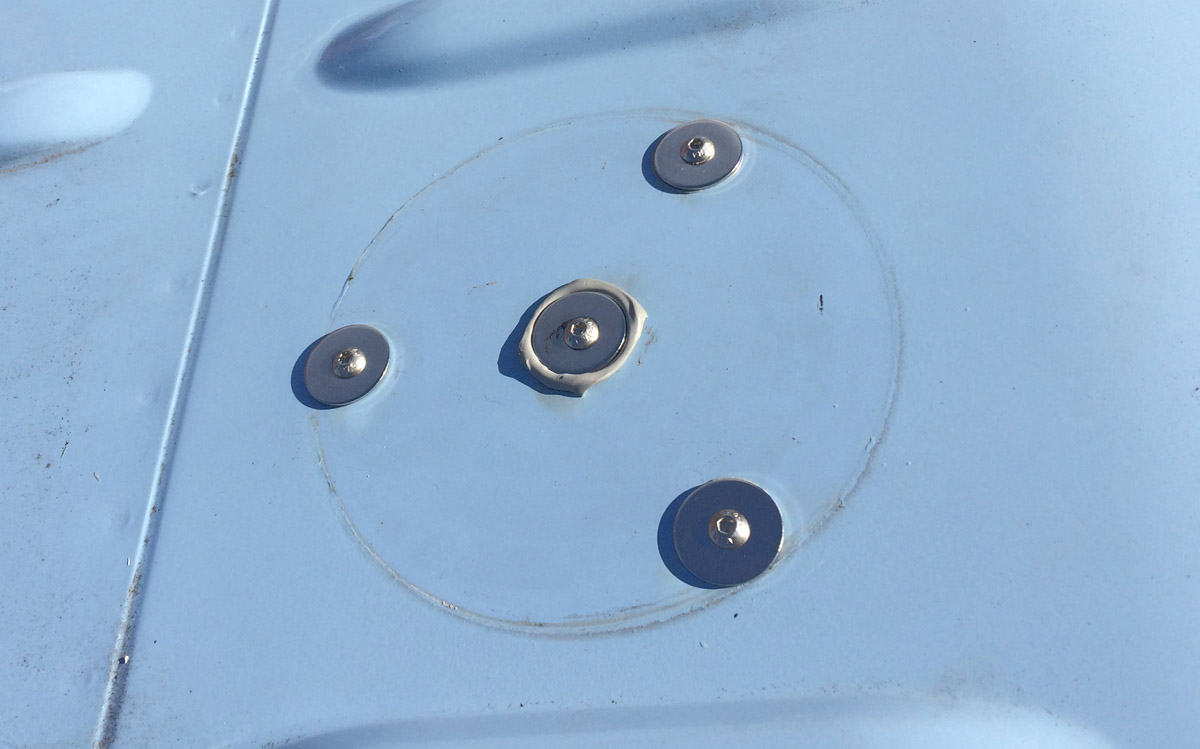 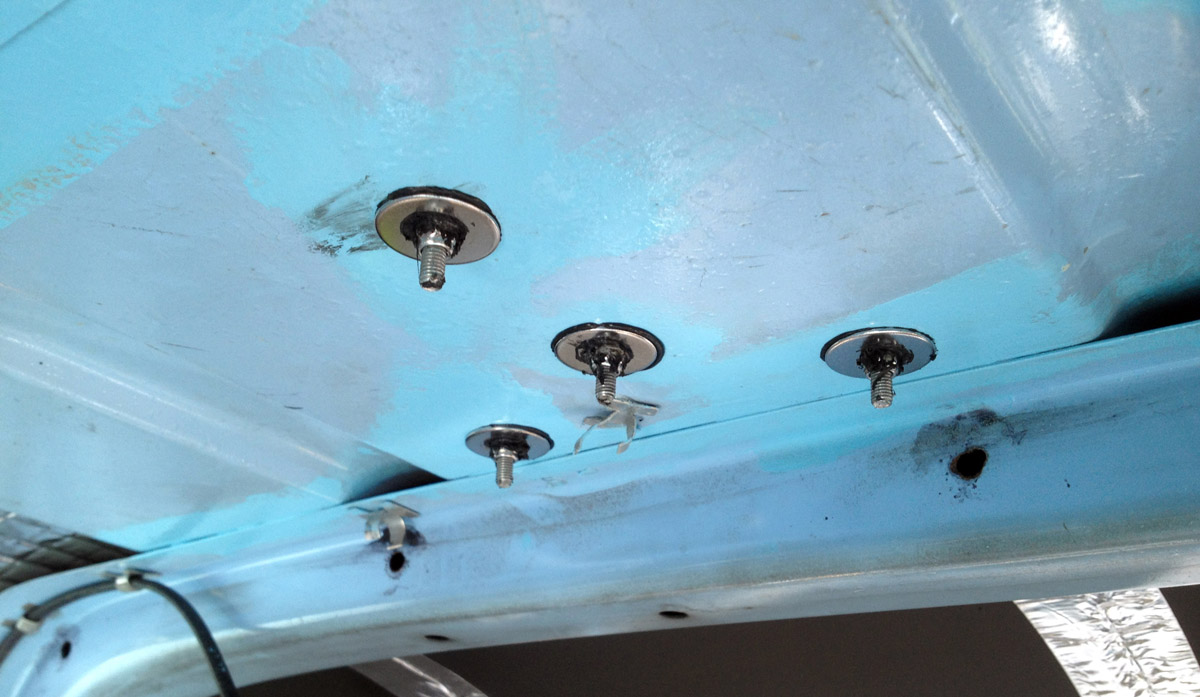 These were covered with eternabond tape, too. No leaks all round.