Another job that could have been done in an afternoon but had to be spread over a few days dodging rain to compensate for the poor quality North of England weather.

So…I was left with a Midi Heki that I wasn’t quite sure I wanted to fit, now the Maxxfan was in. I wasn’t overly impressed with the quality of it either, feels awfully plastic-y and a bit flimsy. I’d expected better for £300. But I’d left it too late to return, couldn’t be arsed to sell it on and I’d cut the template out of the box…so probably easier to just go ahead and fit it…at least the amount of natural light coming into the van would be increased if nothing else.

First step – measure carefully – it was critical to get the hole between the two supporting ribs but not so far forward it would interfere with the movement of the Maxxfan. Once I was sure. it was time to remove the Flettner vent. I was pretty impressed with how this kept condensation down and the air fresh but it will be superceded by the ventilation upgrades. I’ll keep a hold of it for another project along the line. If you’ve ever wondered what one looks like inside – wonder no more. When they resprayed the van, they didn’t remove this. Which is fair enough really. 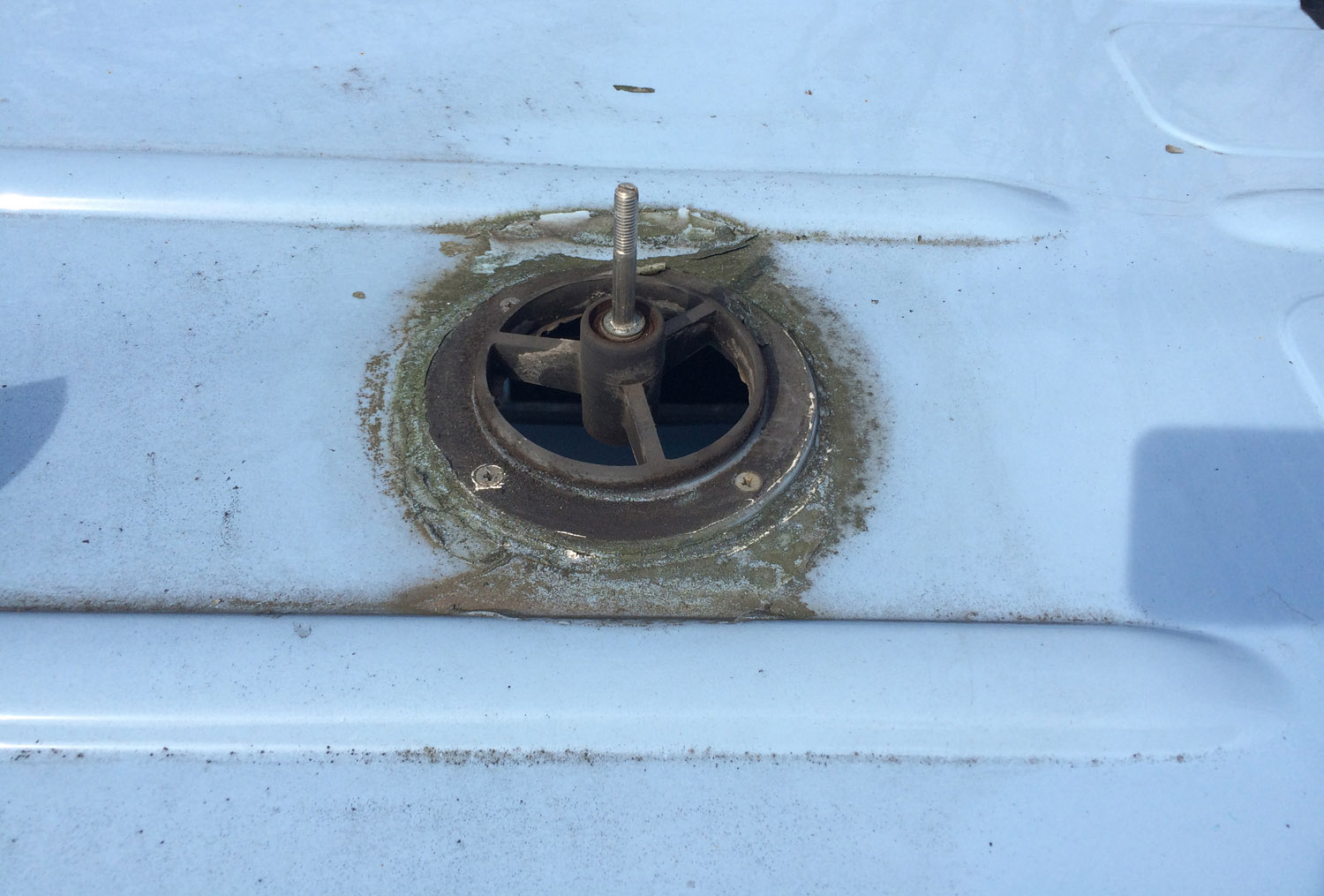 An absolute pig to remove the screws which seemed to be made of the softest metal known to man, and threaded on first turn. Some drilling, much swearing later – left with some (badly prepped upon fitting) rusty holes. It would appear red oxide primer (being porous) is not a good thing to leave solely on bare metal. 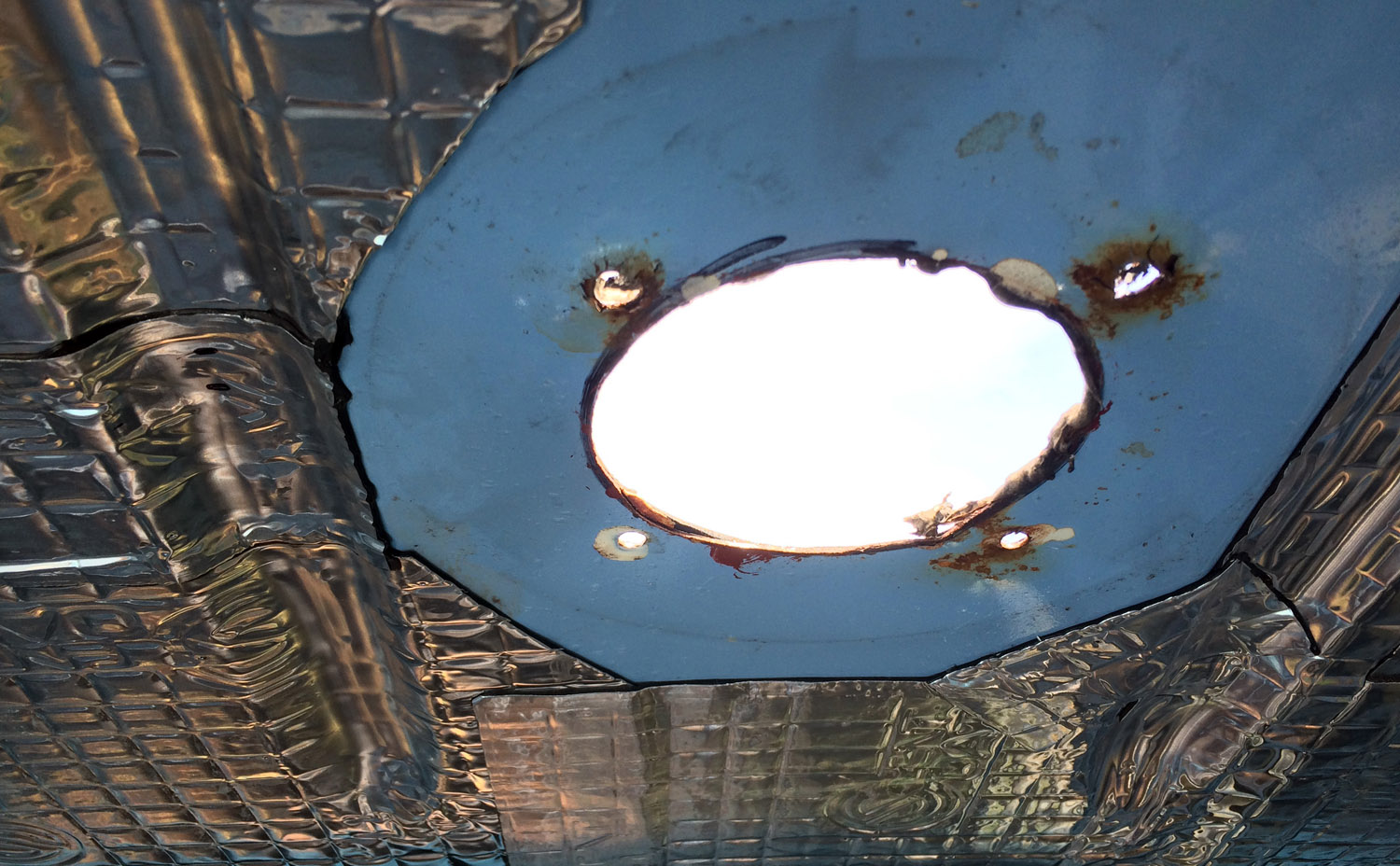 Annoyingly, the removal of this turned out to be unnecessary due to the fact that using a template to cut the hole made things nightmarish once the roof ribs and curvature were taken into account. Hindsight – great. Worked out much easier, and more accurate to just measure a 700x500mm hole, and mask off the edges. I put a thick sheet of wood across the roof to support my weight when working on top – the spot welded T1N roof isn’t renowned for strength, and my Christmas overeating is still ongoing, 4 months later. 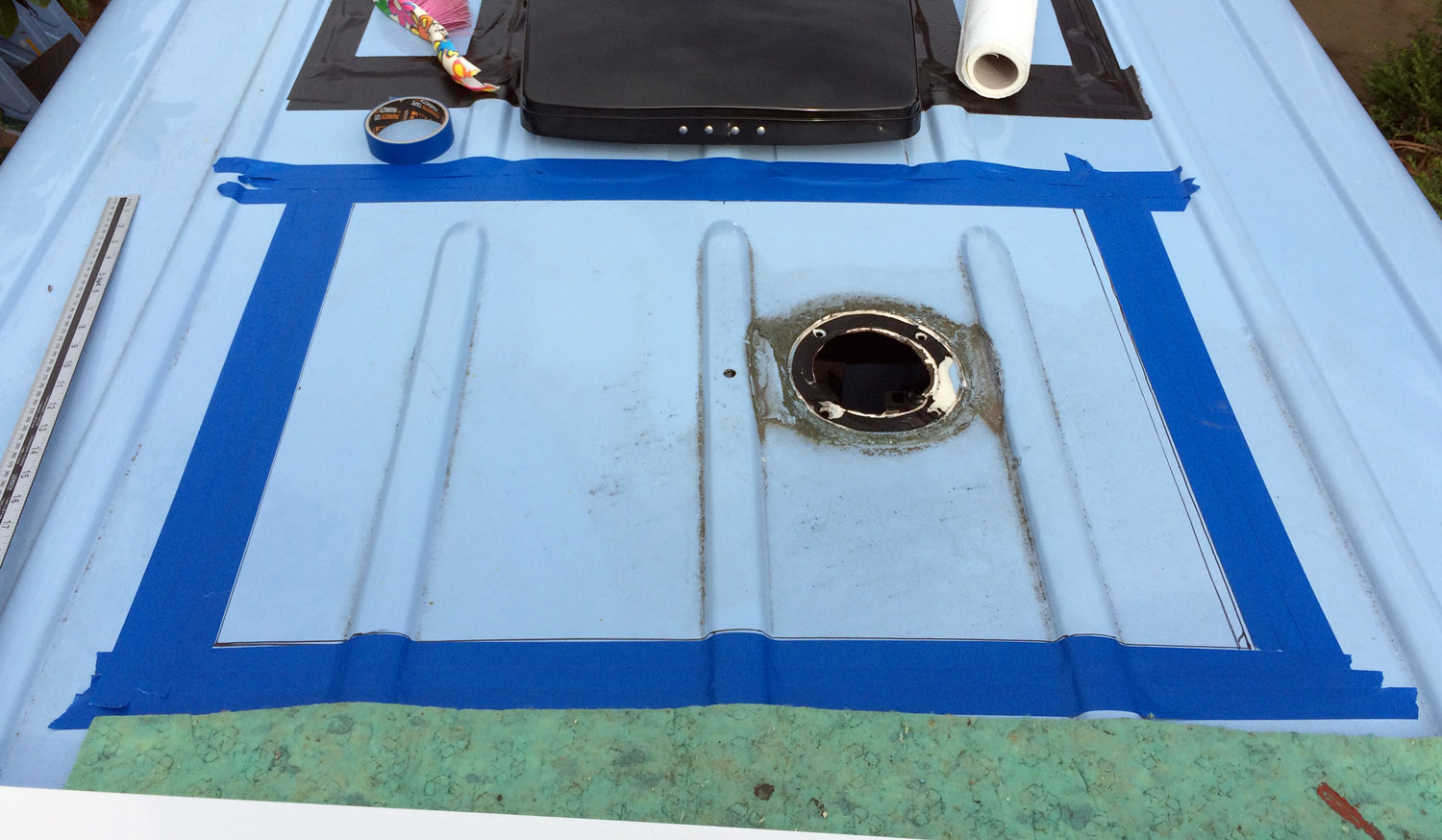 Adopted the age old method of cardboard-box-held-up-with-tripod under the hole to contain the metal shavings. Worked far better than it should’ve. 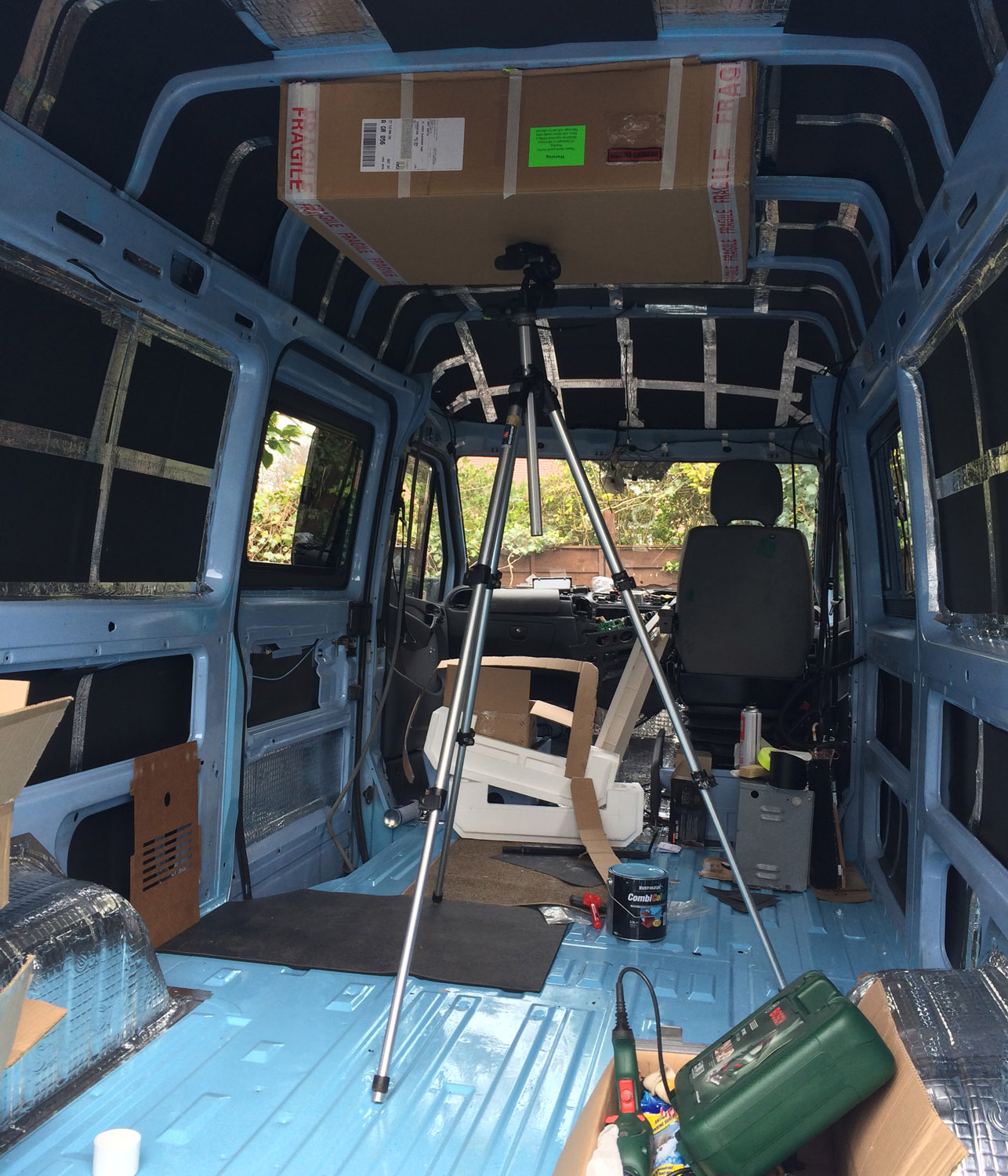 Drilled the corners and got the jigsaw in. Ah man, another hole in the roof. What’s that? Another rainstorm, of course! 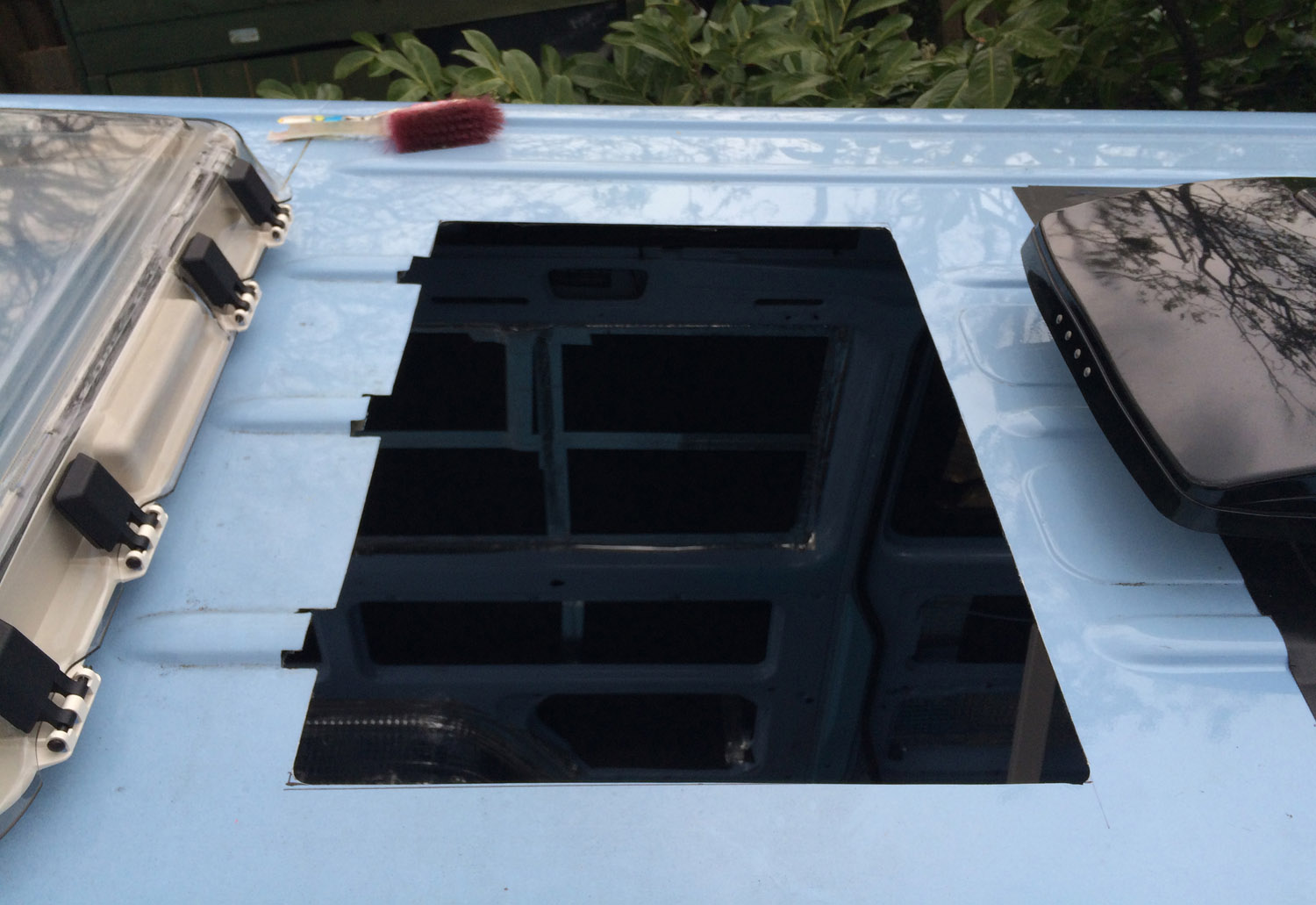 The next hurdle – not one, but three ribs to contend with. Ugh. Notched them all so the outer frame would slip in underneath and sit flush with the roof. Looks pretty tidy and does the trick – any gaps will be pumped full of butyl sealant. 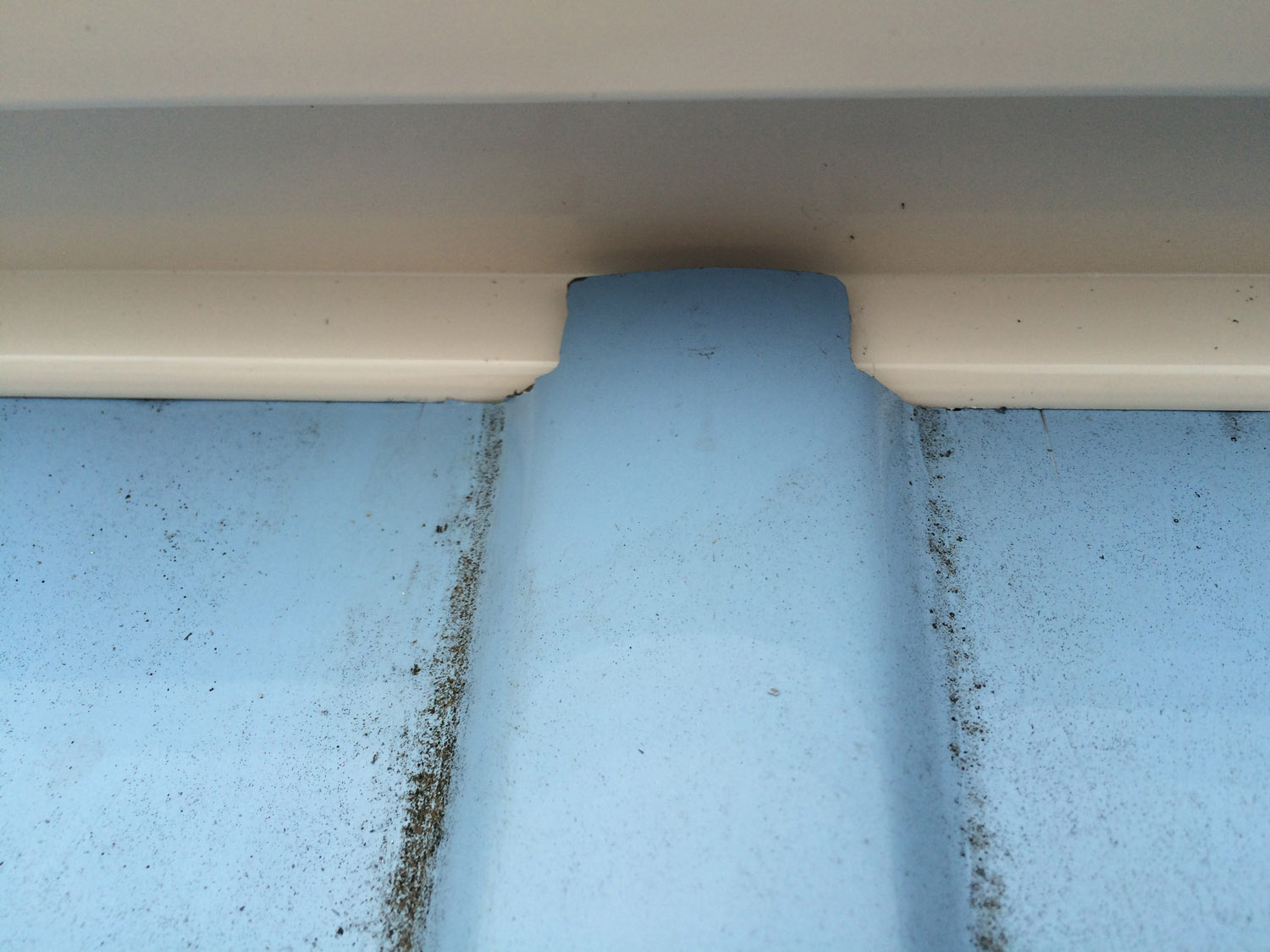 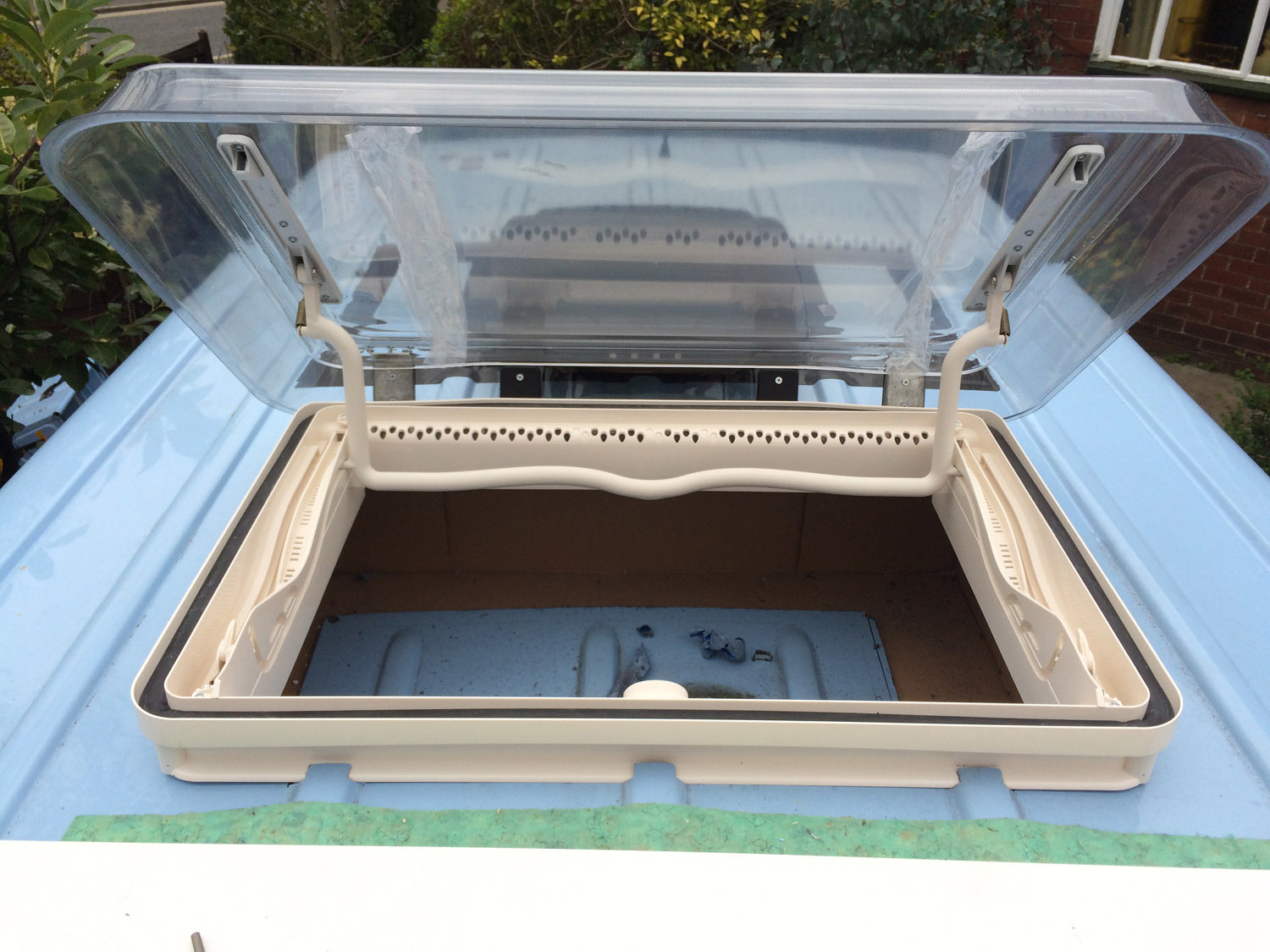 Another wooden frame was constructed, and screwed in from above with a strip of W4 Mastic all around the inside edge. Bare metal painted with Rustoleum followed by dry fit of rooflight and holes drilled for the Heki brackets inside. Once I was happy all lined up it was time to fit for good. 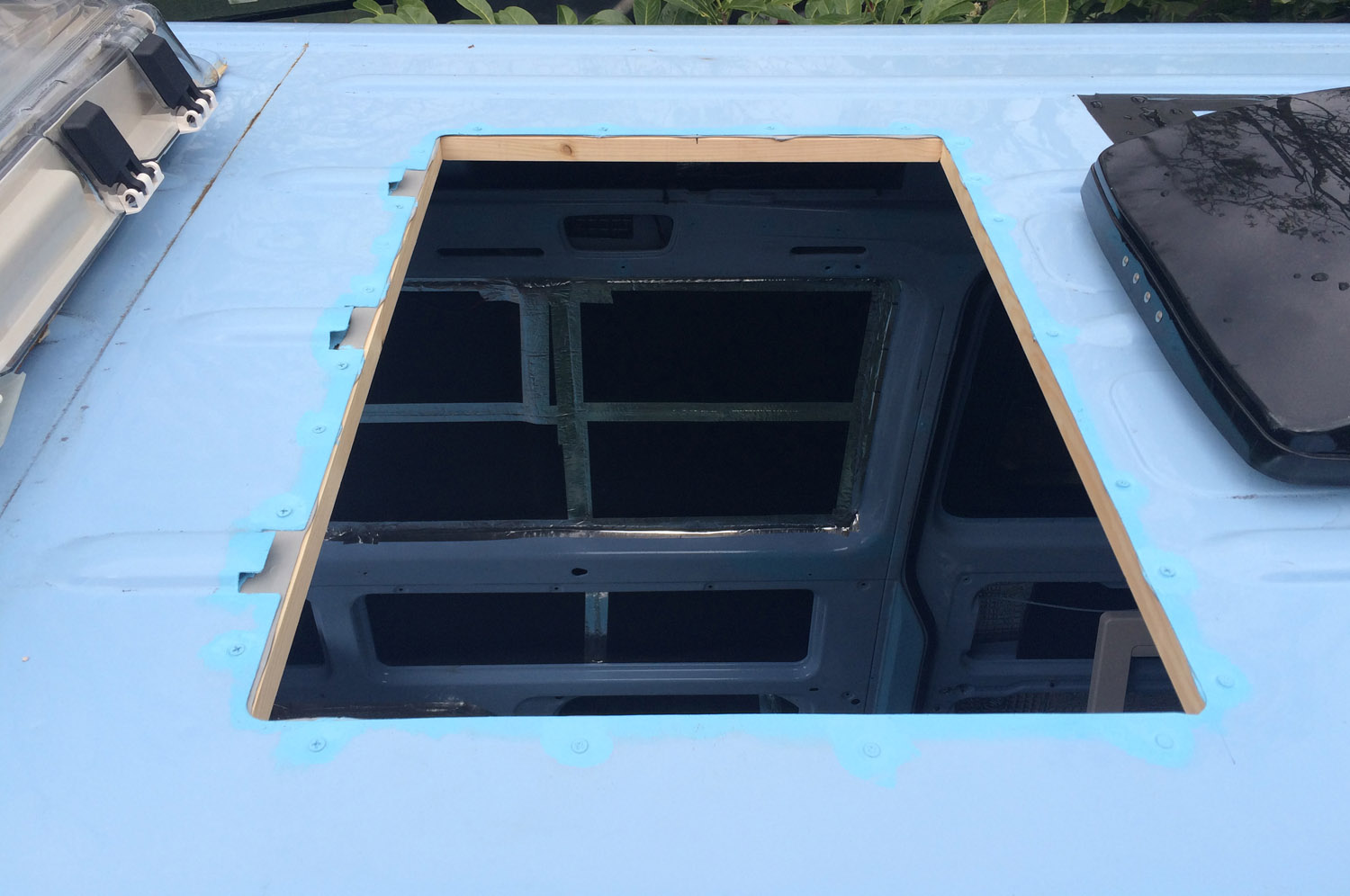 I cut a V-shaped notch in the nozzle of Sikalastomer Butyl sealant and put a hefty unbroken bead around the edge of the frame. 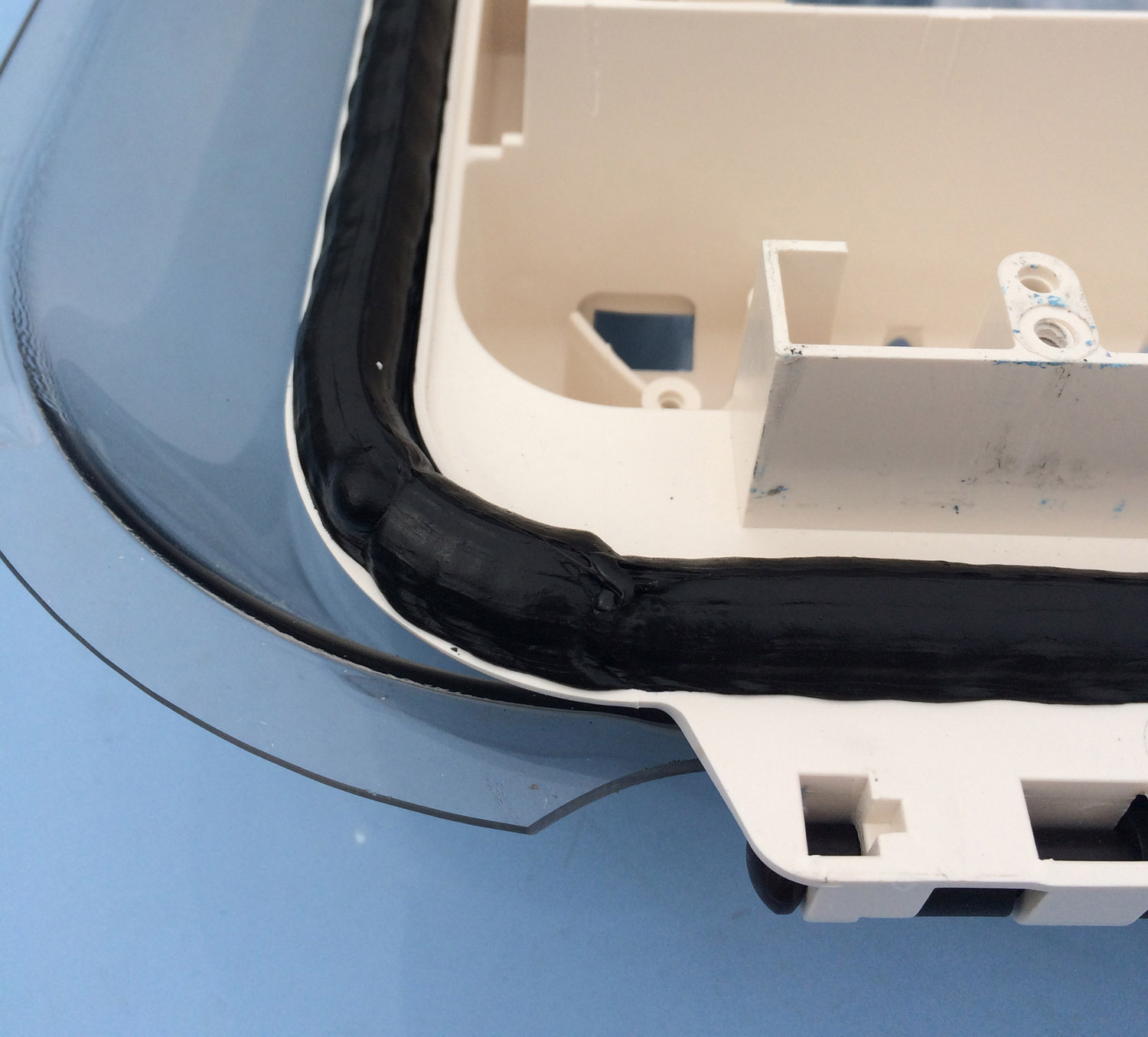 Then, standing in the van with my head out of the hole, I rested the whole thing on my head like a weird plastic tortoise, and carefully lowered it into the opening. Without getting the black chewing gum that is Sikalastomer everywhere. Perfect fit first time – phew. Filled any remaining gaps inside and out, brackets were screwed in and everything secured. Then, a strip of Eternabond tape all around the front and sides (not sure about the back yet, awkward around the hinges) makes it watertight. Hopefully. 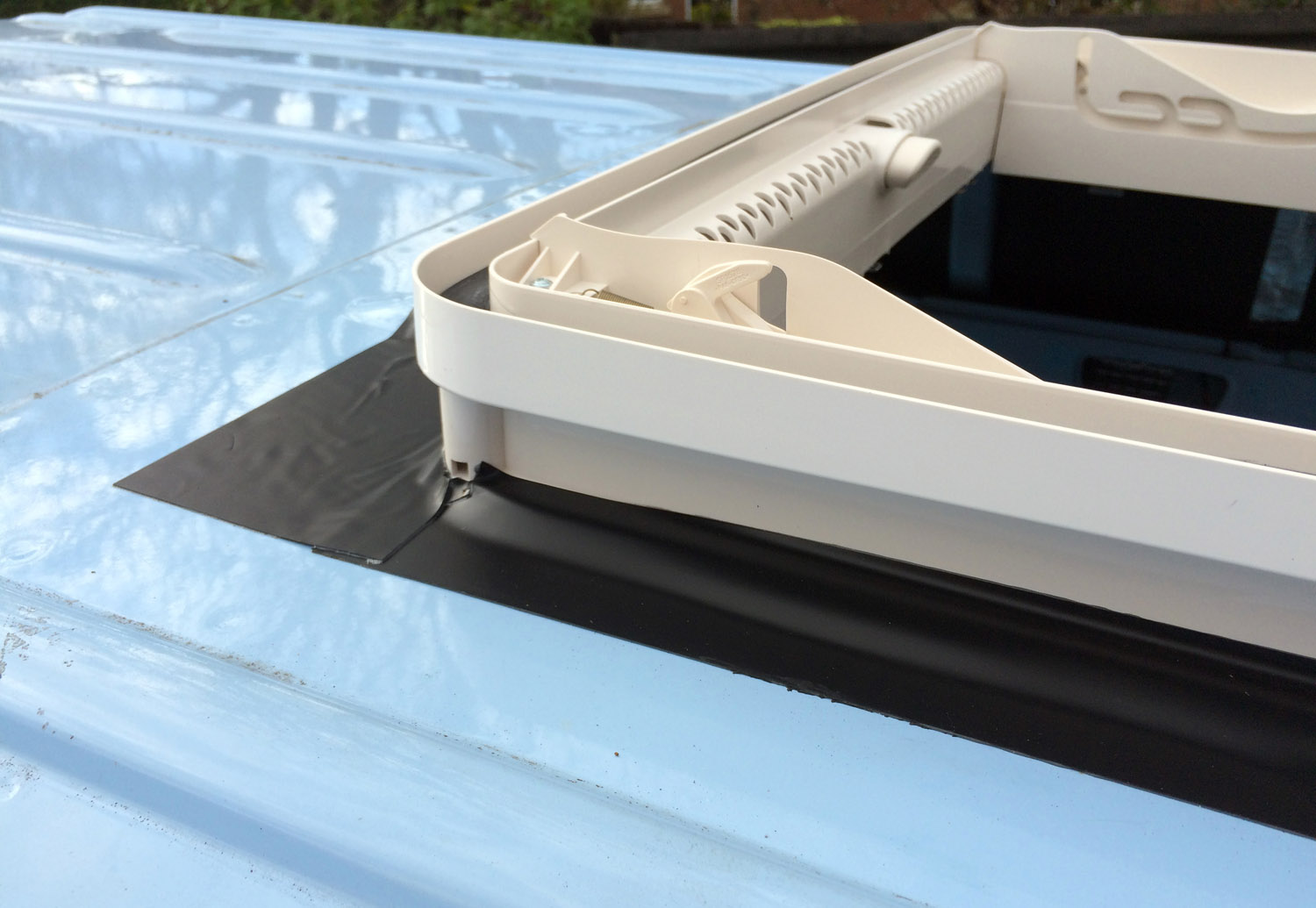 Pretty tight looking fit with the Maxxfan but plenty of room for both to be opened at the same time. 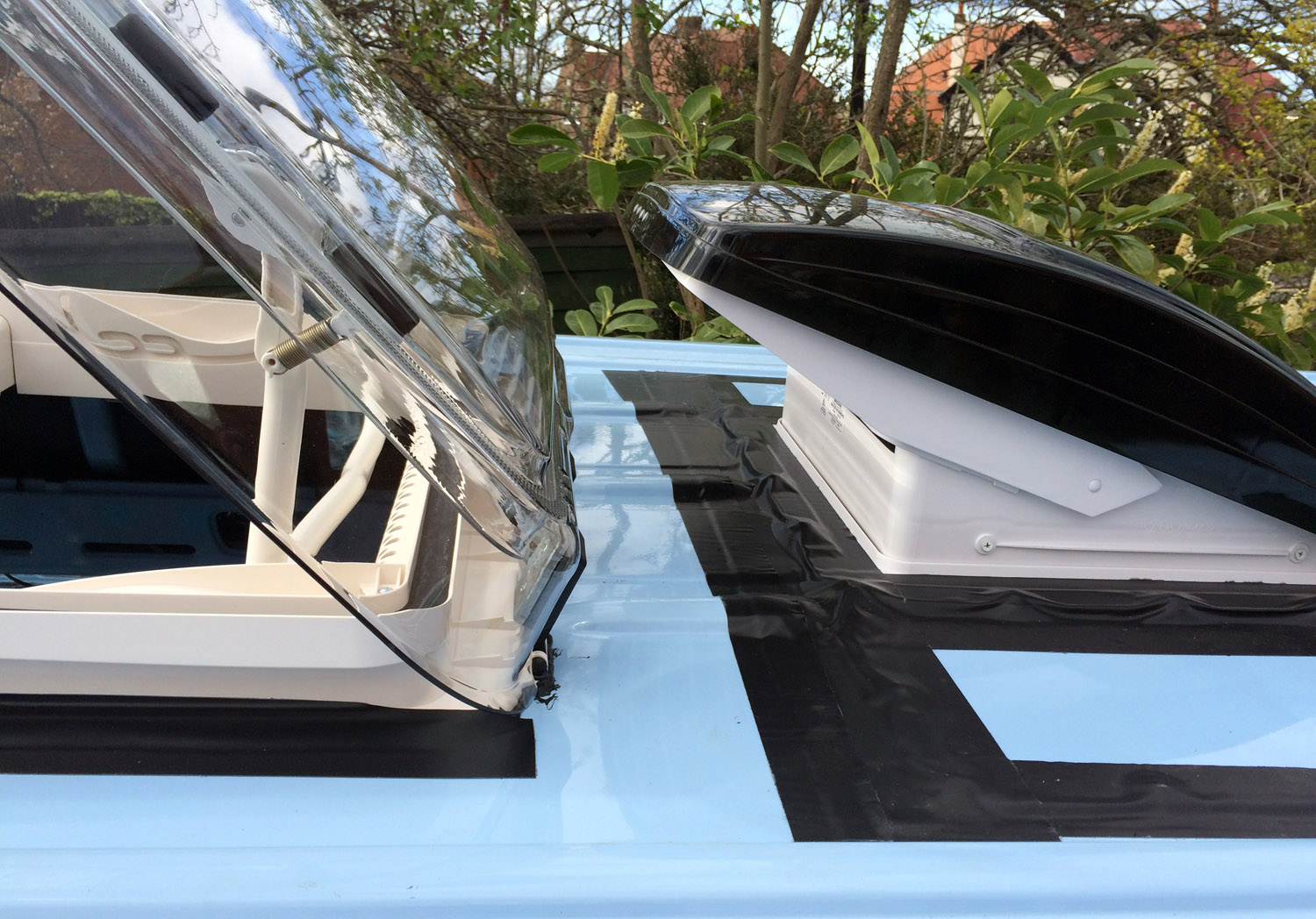 The roof as it stands. Spotted the early onset of some seam rust – which will be dealt with very shortly before it spreads. 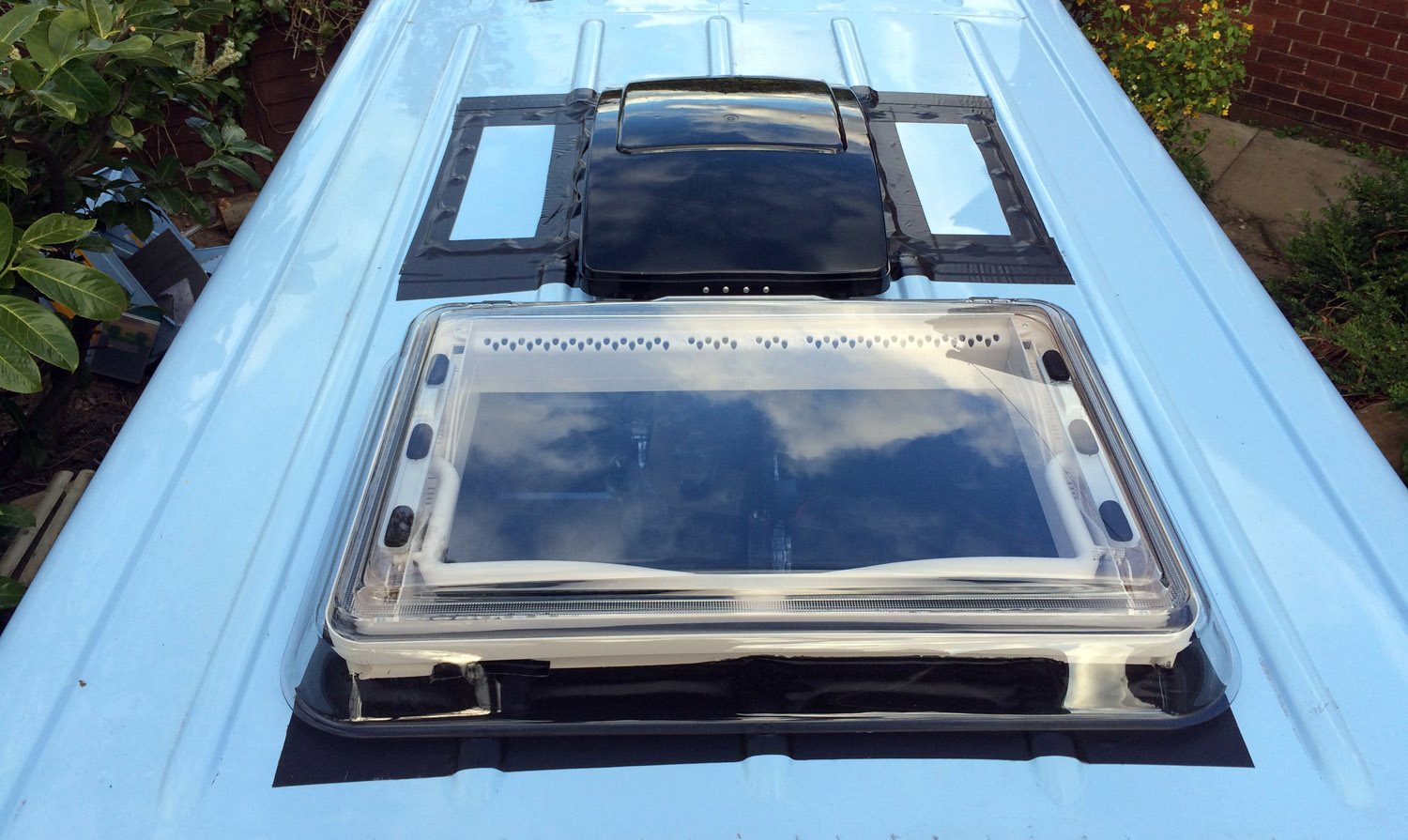